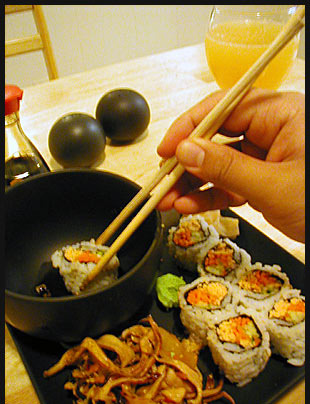 I was out with family this weekend and we went to a Japanese restaurant. As is usually the case with sushi, the entire lunch turned into a swap meet. Sushi holders at chow time are akin to stock traders. Trades were made and food made its way across the table faster than Leandro Barbosa.

If you like Sushi, you’ll probably agree that spicy tuna rolls normally top the taste buds chart. Unfortunately, this place thought that spicy tuna roll meant “tuna roll swimming in Tabasco sauce”. Acting like a GM, I started unloading the damaged rolls as if I was Isaiah Thomas giving away expiring contracts—kids, this is only a good idea when food is expiring, so keep that in mind.

At one point, I turned to my uncle, the only one eating sashimi (fish on the outside, rice on the inside—basically the inverse of sushi), and offered him one of my expiring spicy tuna rolls for a piece of yellowtail sashimi. Sage that he is, he scoffed immediately and demanded a piece of shrimp tempura as compensation.

I had no choice. Feeling like the aforementioned Zeke, I called him Ernie Grunfeld, and likened the deal to the Knicks overpaying for Jared Jeffries.

GM analogy from my perspective: I had had no sashimi and prior to signing Jared Jeffries the Knicks had no defense. Not that my stomach needed to overpay for sashmi; I was already getting full. Just like the Knicks didn’t need Jeffries.

This makes the spicy tuna roll he received Deshawn Stevenson.

GM analogy from his perspective: Stevenson’s fiery temper often works to his detriment, the basketball version of slathering raw fish with tabasco sauce. The shrimp tempura, naturally enhanced by the batter it is cooked in, can only be compared to increased production from Gilbert Arenas (statistically improves exponentially every year) and Caron Butler (looking to be healthy this year after dealing with thumb problems last year).

“Man, this deal was not fair!” I exclaimed, after making the Jeffries analogy.

“Don’t worry,” he said. “You’re getting the franchise.”

Knowing the depth of his Wizards fandom, I shot him a confused look. “I mean, I know the Knicks were bad last year, but…Jared Jeffries? The franchise?”

“No, I was referring to the sashimi.”