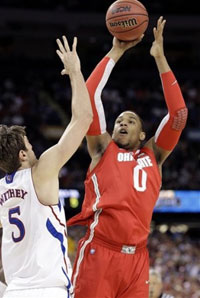 The Sacramento Kings. Full of talent. From top to bottom—from Tyreke Evans to Hassan Whiteside—the Kings are full of talent, but the problem is that aside from the organization being one of the more poorly ran franchises, the Kings are in terribly rough shape.

The aforementioned Evans, one of the most talented young players in the League, seems not to be terribly able to play in such a way that the team is actually benefited; he scores a lot of points (and is exceptionally gifted doing so), but can’t seem to involve his teammates well enough to get wins. He’s the most versatile and treasured player on the team.

DeMarcus Cousins is probably the most affecting player on the Kings; problem is that he affects the team in the wrong way. He may have gotten his first coach fired and at times, seems to be a knucklehead.

Donte Greene is kind of like a mashup of Evans and Cousins, and less talented on the whole. The rest of the team is built with singular talents who have not been coached well enough to do anything worth writing exclusively about. The team’s most valuable player, Isaiah Thomas, was the last pick of the 2011 NBA Draft (having said that, he probably merited a late-first round selection in hindsight).

The team wants the most valuable players in the Draft, and those players are already selected, such as Anthony Davis and Thomas Robinson—those two would be perfect fits to raise the level of play and overall professionalism of the team. Bradley Beal and Michael Kidd-Gilchrist (as talented as they are) would duplicate the players already present on the team. Who’s the next best player to meet that ‘just right’ level of talent and professionalism?

With the fifth pick of the SLAMonline Mock Draft, the Sacramento Kings select…

The Ohio State Buckeye forward would do a couple of things for Sacramento. One such thing is that he would bring a greater stability of the team’s foundation of youth, as he would be the right kind of talent to compliment Cousins in the post and also allow for new offensive possibilities, seeing that he also has three-point range (a la Kevin Love).

But he’s maybe only 6-8 (he’s listed at 6-9 and 260 pounds), Sullinger has enough bully in him to impress upon the team that they should compete harder and more consistently, as the only reason he’s being drafted this year rather than last year is because he wanted so badly to compete for a National Championship (as he passed up becoming the No. 2 or 3 pick in the 2011 Draft). Even better than that is that Sullinger has a great track record of being a great teammate and intelligent as well.

Sullinger, fortunately, isn’t a malcontent or a knucklehead, and he will likely force Sacramento to upgrade the rest of the roster and trade away players who don’t serve any kind of needs within the course of the games. A frontcourt lineup of Sullinger at power forward, Evans at small forward and Cousins at center might be a winning combination/

Sullinger may be just the man to balance the scales of Fire (Cousins) and Ice (Evans)—and bring a new hope to the capital of California.