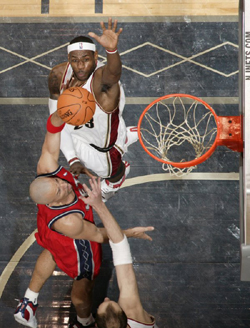 I have been to four Nets home games this year. They are 0-4 in those games. Not a good basketball team. I was at the Houston game with SLAM Senior Writer Alan Paul, where the Nets were embarrased in front of their home fans. The biggest surprise of the evening was when they put Jason Kidd’s numbers on display, and he was grabbing more than 8 rebounds per game. He leads the team, and their second leading rebounder, Nenad Krstic, is out for the year. Some people whom have fewer rebounds per game than Kidd include: Big Z, Samuel Dalembert, LeBron, Memo Okur, and Eddy Curry.

Some of Jason’s rebounding numbers come from his not having a teammate interested in taking those boards from him. He’s grabbed 7.5 boards per game in years past, but he’s supposed to be slowing down and paying fewer minutes to rest up. Not being forced to take on more and more responsibility. I honestly thought that his rebounding average was a typo, that they might have switched it with assists. Guess not. Mikki Moore, Jason Collins, there are rebounds available for you. Of course Jersey is tied with Toronto for the 3 seed as I write this. I guess my point if I have one is that Jason Kidd has a lot of rebounds.