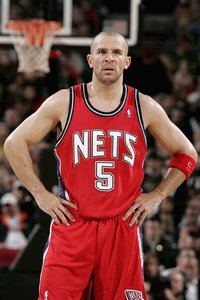 Jason Kidd and the New Jersey were in full damage control mode yesterday. Kidd denied that he was staging a strike by not showing up to the Knick game on Wednesday night and defended his right as a human being to get sick. The Nets appeared to stand by him.

“I didn’t miss a game due to unhappiness. That’s the first thing to clear up. I was sick,” said Kidd.

“Jason … assured me that he had indeed been under the weather and was not able to play,” [team president Rod Thorn] said. “He has too much respect for the game to ever do anything like that. If you look at his record, nobody’s been tougher than he. Nobody’s played under adverse circumstances more than he has.”

Despite Kidd saying that he’s happy in Jersey and would like to finish his career with the Nets, there’s something strange about the way he didn’t show up, especially considering the tenuous contract situation and how he’s felt about the team of late. One gets the feeling that this saga is far from over.