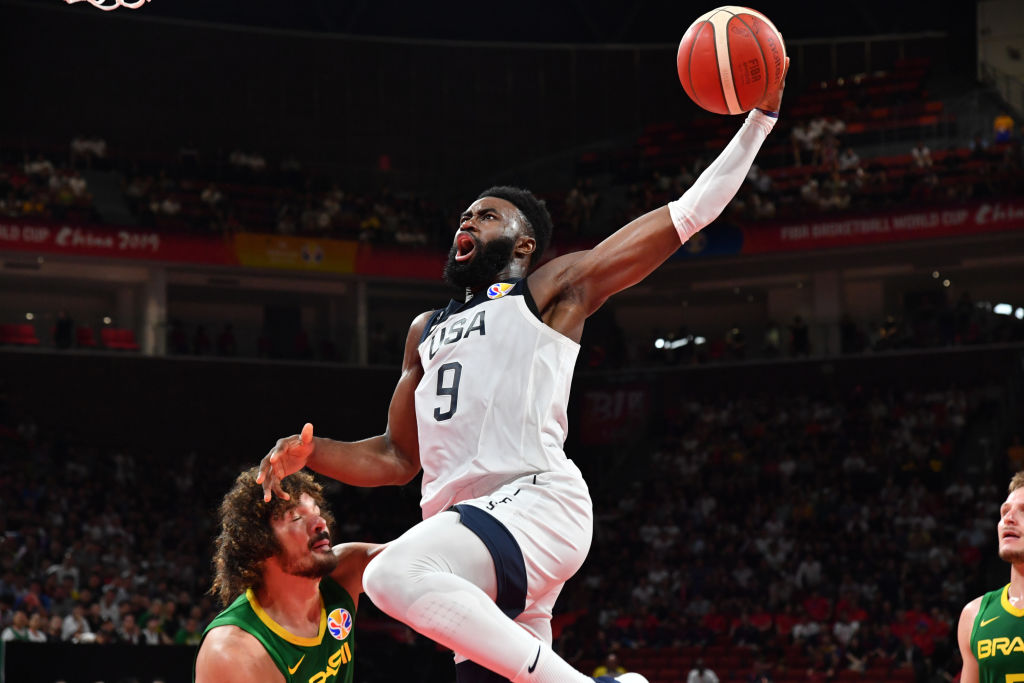 Jaylen Brown has stepped up for USA Basketball during international play and the 22-year-old is showcasing growth in his game at a time when it’s most critical. The former No. 3 overall pick has just one season left on his rookie-scale deal with the Celtics and his play in China may provide a blueprint for how he can answer some of the remaining questions about his game.

Brown is an athletic talent with obvious weaknesses capping his potential. Shot-creation and play-making haven’t been his calling card since coming into the league out of the University of California. During his 222 career NBA games, he’s only recorded five assists on one occasion (1/16/18 vs. the Pelicans) and while his usage increased last season, it correlated with a slight dip in player efficiency rating.

As I previously wrote for Hoops Rumors, many executives around the league aren’t overly concerned with the risk of signing Brown to a long-term deal despite the perception that he’ll never develop into one of the top players on a contending team. However, while he may have a safe floor; his perceived limited ceiling may adversely impact him in negotiations on his next contract.

Brown’s play for Team USA could be the catalyst that allows him to elevate his status in the league. He’s increased his role since Jayson Tatum went down with an ankle injury, showcasing play-making ability from a different position than he’s accustomed to playing: the power forward position.

“[Brown is] a strong player. For his size and strength, he moves well,” Popovich told reporters after USA’s win over Brazil (via Chris Forsberg of NBC Sports). “He can really penetrate. He can catch and pull, or get to the rim … He works on defense. He’s just kind of an all-around player. He’s stepped in and given us good minutes on both ends of the floor for sure.”

Coach Brad Stevens hasn’t played Brown at power forward much since the 6’7″ wing came into the league. With Marcus Morris residing in Boston, there wasn’t much of a need. Brown didn’t see any action there last season and spent just 3% of his minutes at the four during the 2017-18 season, per Basketball Reference. However, Morris has departed in free agency. Al Horford is no longer around to periodically steal minutes at the four and the Celtics’ roster lacks a proven option at power forward.

Brown’s long-term fit in Boston could be as a small-ball four in Stevens’ offense. Jayson Tatum and Gordon Hayward are arguably best-suited on the wing and assuming Hayward returns close to his peak form (still an if), Brown at the four may be the only way to get the Celtics’ five best players on the floor at the same time.

Brown is currently eligible for a rookie-scale extension and whether he signs that deal now or waits until he’s a restricted free agency next summer, predicting the figures on a new contract is no easy task. There isn’t expected to be many top players on the free agent market next July, which is something that will help Brown’s camp in negotiations. Carrying over his international success at the four spot could be another factor.

It’s unclear exactly how the Celtics will integrate all of their new parts this upcoming season or if Brown’s international play will impact Stevens’ plan for the rotation. The coach spent time with USA Basketball earlier in the summer and remains a “cheerleader from afar.” Like many, Stevens believes the offseason tournaments benefit player development.

The 2019 FIBA World Cup and 2019-20 NBA season are critical periods for Brown, who has until October 21 to reach an agreement on an extension with the Celtics. Perhaps his evolution to play-making, small-ball four could be another example of how a summer of international basketball can help a player realize all of his potential.