Jayson Williams was drafted 21st overall by the Phoenix Suns in the 1990 NBA Draft. He spent nine seasons in the League, posting career numbers of 7.3 points and 7.5 rebounds per game.

Just a few years after retiring, Williams’ life changed forever on one drunken night at his mansion. Upon giving his friends a tour, which included a look at his gun collection, the former athlete set off a 12-gauge shotgun that he believed to be unloaded, killing his limo driver Gus Christofi.

Williams then tried to cover the event up, wiping the gun, jumping in his pool, and asking a friend to get rid of his clothes. Eventually, he agreed to a plea deal of aggravated assault and spent 26 months in prison.

Now, in a profile with 60 Minutes Sports set to air on Showtime at 8 pm ET tonight, Williams admits that he was wrong to try to conceal what happened, calling himself “a coward.”

As someone who has struggled with alcoholism since before the incident, Jayson also shows in the feature that he is working hard to stay sober, and to prevent others from heading down a similar road.

He continued to drink heavily after the shooting and throughout the years of court appearances.  He says he drank “a fifth of moonshine” daily at the peak.  After a plea deal of aggravated assault in his criminal case and a settlement of the multimillion dollar suit filed by the Christofi family, he spent 26 months in prison.  He continued drinking after his release and he was arrested for DUI after crashing his car.  Then he found Epiphany.

Williams spent 30 days at the rehabilitation center and never left; he felt it was better for his own precarious sobriety to remain helping others as a volunteer in the structured environment.  “I’ve quit trying to protect myself. I just try to live right and let the pieces fall where they may,” says the former NBA All-Star.  He credits the program for getting him off alcohol and for providing him a role that helps keep him sober, but recovery is an ongoing process he says.  “That’s my only job, to be sober…I don’t know what happened yesterday.  I know I was sober. I damn sure don’t know what’s going to happen tomorrow…,” Williams tells Wertheim.

Williams is speaking out now to encourage abusers of opioid drugs to get help for a problem he believes is more unforgiving than alcohol.   “I’m not here to get back on TV…[Opioid addiction] is bigger than I ever imagined…When a kid does a relapse, it’s not having a glass of wine…He doesn’t come back, he’s dead,” says Williams, referring to the fatal overdoses that mark the epidemic.  “We got to take the stigma off [rehab].”

Tune in tonight to see the full story of Jayson’s recovery.

Jayson Williams is Headed to Jail

Jayson Williams in a Car Crash 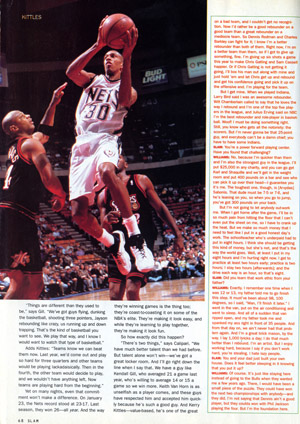