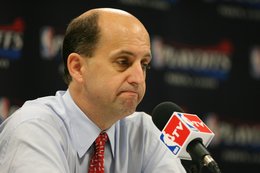 Jeff Van Gundy is one of the better TV analysts working today, and he’ll be calling the insanely hyped Lakers/Celtics Finals for ABC, alongside Mike Breen and the irrepressible Mark Jackson.

Van Gundy took in a conference call with the media yesterday to discuss the championship round, and he not only sees the Lakers winning the ‘chip this year, but many more after that.

“My pick, I think the Lakers are the most talented team in the league, and they’re missing their third or fourth best player in Bynum,” said Van Gundy, who will join Knicks broadcaster Mike Breen and Mark Jackson for the 11th finals meeting between two storied rivals.

“So when they get [Bynum] back next year, I think they can be a dynasty. The Lakers will win it this year over a very good Celtic team.”

Jeff, I’d love for your prediction to come true, obviously. But take it easy for a moment, compadre. Let’s see them win a title first – which, in and of itself, will not be an easy task – before we start with the dynasty talk, OK?