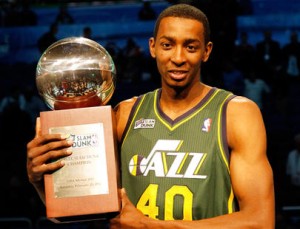 There’s a reason people like Jeremy Evans and LeBron James are who they are. For instance, one cares about a meaningless dunk exhibition, whereas the other hasn’t and likely never will take part in it.

Jeremy Evans might have been outscored 30-2 by LeBron James on Saturday. But there’s something Evans says he has on the Miami Heat star. The Utah Jazz forward is the defending NBA slam-dunk champion. He has no doubt who would win if he had the chance to take on James.

“I’m going to say I would,” said Evans, whose Jazz fell 105-89 to Miami at AmericanAirlines Arena. “I haven’t seen any tricks from him yet because he hasn’t been in (an NBA) dunk contest. … You need the tricks and moves rather than just being a power dunker in a game.”

For what it’s worth, LeBron James agrees with Jeremy Evans’s boast, adding that he probably never will compete in what was once the signature event of All-Star Weekend:

“No,” said James, who turns 28 on Dec. 30. “It’s over with. I’m getting too old for that. … There were times when I wanted to do it. But I came into All-Star Weekend a few times banged up and I didn’t want to risk further injury.” […] “I’m not a dunk-contest guy, so he probably could beat me in a dunk contest,” James said. “I’m OK with that.”

Evans looks forward to defending his dunk title on February 16 in Houston, and it goes without saying, but he is very confident in his chances at a repeat.