Linsanity makes a special appearance, Andre Drummond's tip wins it all and more. 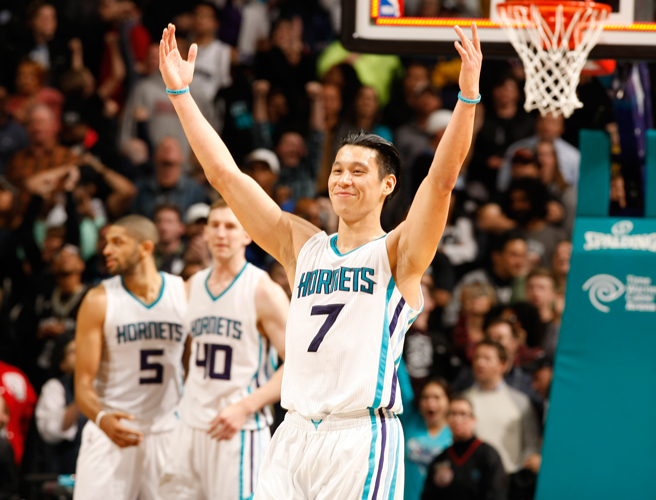 Lo and behold, Charlotte rallied back behind Jeremy Lin’s 29 points to steal the win away from the Spurs. Fifteen of Linsanity’s points came in the fourth quarter alone as the home team took care of business.

Jusuf Nurkic mighta had his moment with this block on LeBron James, but the Cavs most certainly had the last laugh, as they beat the visiting Denver Nuggets by 33 points on Monday night at the Q. LeBron finished with a triple-double of 33 points, 11 boards and 11 assists in Cleveland’s 50th win of the season.

Paul George led Indy with 15 points to get the win over the Philadelphia 76ers on Monday night. With the win, the Pacers sit in the 7th spot in the Eastern Conference, a half game ahead of the Bulls. Monta Ellis added 13 in the win, and Ian Mahinmi finished with 12 points and 10 rebounds.

Isaiah Thomas tallied 28 points and 7 assists as the Boston Celtics beat the Orlando Magic on Monday. Avery Bradley added in his own 22 to get Boston back-to-back wins and hand the Magic their fourth straight loss.

The Detroit Pistons overcame a 17-point deficit to win against the Milwaukee Bucks in Motor City. The game came down to the wire, and it was Andre Drummond’s tip that ended up being a game-winner for Detroit.

The win over the Hawks on Monday night was the Wizards’ fifth straight. John Wall scored 27 points and dished out 14 assists, while Bradley Beal added 25 to lead the Wiz to victory to keep them in the Eastern Conference’s Playoffs picture.

In his return after missing four games, Pau Gasol put up a solid double-double of 14 points and 14 rebounds. Eighteen points apiece came from Derrick Rose and Taj Gibson as the Bulls took care of the Kings.

After losing to the Spurs over the weekend, the Golden State Warriors bounced back with a win in Minnesota against the Timberwolves. Draymond Green had the pretty stat line of 24 points, 9 rebounds, 6 assists, 3 blocks and 3 steals in the victory. Both Ricky Rubio (20 points, 11 assists) and Karl-Anthony Towns (24 points, 11 rebounds) finished with double-doubles on the night.

The Grizzlies overcame a 13-point deficit against the Suns on Monday night, led by Lance Stephenson’s 16 points off the bench to earn back-to-back wins after having lost four straight. Devin Booker led the Suns with 18 points in the loss.