Jerry Stackhouse Is Not a Byron Scott Fan 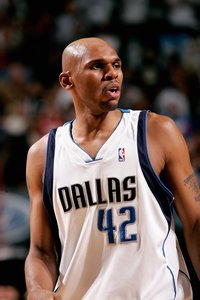 One of the stats that you can expect ESPN to shove down our throats tonight during Game 3 of the Mavs/Hornets series, is the fact that New Orleans is 0 for the decade in Dallas. If Chris Paul and his teammates needed any more motivation to break that ugly streak, Jerry Stackhouse has certainly done his part in providing it.

Stack put Hornets head coach Byron Scott on blast, saying that Lord Byron is a sucker and that he’s thought about beating the tar out of him.

He was sitting on the sideline and we just got into a little conversation or something and he was going to tell me, you know, ‘Talk to me when you get a ring.’ I was like, I told that fool, ‘If I played with Magic and Worthy and Kareem I’d have a ring, too’. So, you know, he’s a sucker in my book, but that’s a whole other story.”

Thank you, Jerry Stackhouse, for you have just personally transformed this series from a bit of a snoozefest into something a little more compelling.

Word of advice to Byron: Stay away from Jerry. He don’t play.