The League, Passed Down 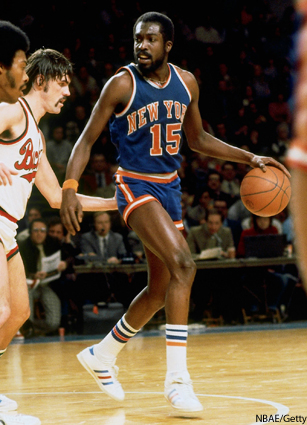 A few months ago, I was living on a farm in Southern Oregon and wanted to keep up with the Knicks. The farm didn’t have a TV but it did have WiFi, so I signed up for NBA League Pass. For $179, I was able to watch any NBA game, even four at time, which is perfect for me because I have the attention span of a 7-year-old who drank some coffee. Most of all, League Pass allowed me to keep up with the Knicks. After a day on the farm, I would rush inside to see if Melo hit 30 or if Camby was allowed to take off his warm-up gear. But following the Knicks wasn’t just about watching basketball, it was about carrying on a tradition. I’m a third generation Knicks fan and League Pass gave me a way to carry on the family name.

My family has loved (and lamented) the Knicks since the 1950s. My grandfather and his friends would huddle around the radio like it was the World Service announcing the Normandy invasion. And they would be rapt, as Marty Glickman called the play-by-play of guys with weird Dutch names that somehow made it past the guards at Ellis Island—guys like Butch van Breda Kolff and Dick and Tom Van Arsdale. It was a team Peter Stuyvesant would have assembled; it was like Old Amsterdam hadn’t yet become New Amsterdam.

When my father was a teenager, he took the family fandom to the next level, going to every home game in 1970. Of course, it wasn’t hard to be a Knicks fan then, with guys like Willis Reed, Walt Frazier, Dick Barnett, Bill Bradley, Dave DeBusschere and Earl Monroe. My father usually bought scalped tickets for about $3 and always sat in the “blue seats” up top—but it didn’t matter. He was in the room, screaming with 19,000 other fans and united by basketball.

I became a reluctant Knicks fan during the exciting time that no one refers to as the Charles Smith Era. We had Ewing, Oakley, Starks, Mason and Anthony (Greg). It was a fun team that never allowed you to have any fun. This year, though, seemed promising. The Knicks were old, but in a weird way, totally fresh. And I could watch every play on my League Pass.

But just like Charles Smith, the excitement was short lived. When I flew back to New York, I opened my League Pass to discover that I would not be able to watch any Knicks games. If a team is local, the game will not air on League Pass. I didn’t know about this bizarre quirk. And because I live without a TV, I had no way to watch the games.

Missing Knicks games was more than just disappointing as a fan. It was alienating as a New Yorker and shameful as a member of my family. Living so close to MSG and not being able to know what was going on inside felt eerily emblematic of our Orwellian technology-reliant culture: I knew what was happening in Golden State but was clueless about the Big Apple.

My back against the wall, I was forced to do something I never imagined I would do: walk down the block to Rocky McBride’s Sports Bar to watch the game. Sitting there with the other loners, I nursed a ginger ale and felt depressed.

Out of nowhere, the guy sitting next to me said, “They’re too old to keep up this level of play.” I surprised myself by turning to him, saying, “Actually, Melo’s in his prime and once Shump is totally back, they’ll be unstoppable.” Suddenly, I was in an argument about the Knicks. And it was so much fun. I couldn’t believe I had never done this before.

It was so much more interesting than sitting in my bedroom watching League Pass. I was no longer a passive consumer of Generation X. I was my grandfather at Mount Eden Avenue listening to the van Breda Kolff Knicks. I was my father sitting in the nose-bleeds, cheering for Earl The Pearl. I was sitting at Rocky McBride’s and talking to a stranger, united by basketball.

I was carrying on the family name.