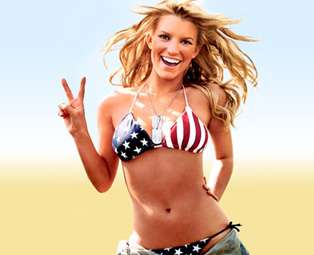 Let’s get right into it…

QUOTES OF THE DAY
“Yeah, I’m married. So don’t come snooping around out at Herriman because you might get shot.” — Jerry Sloan, confirming his recent wedding.

“My name is Marcus. I like to jump rope, too. I like to play basketball.” — Marcus Camby.

THE LINKS
• Jay Williams, welcome back to the NBA.

• Former Raptors GM Glen Grunwald is leaving the Toronto Board of Trade behind and coming to work for the Knicks. He’ll be in charge of trying to help Isiah get a better exchange rate when making trades.

• Scariest lead of the week: “Celtics owner Wyc Grousbeck joked that power forward Al Jefferson looked a lot like Jessica Simpson these days.” I’m not who that’s more insulting to.

• Sideshow Varejao says he’s just trying to forget his summer. I’m guessing the Greek player whose jaw was shattered by a Varejao elbow during the World Championships would have a similar reaction. The Cavs have also sunk a lot of cash into their offices.

• George Shinn continues to do everything in his power to make Hornets fans in New Orleans feel nervous about their team returning.

• The Grizzlies marketing campaign is built around the phrase “Dunkyland.” Yeah, I’m really confused by it, too.

• Marcus Camby is for the children.

• Jerry Sloan says the Jazz are making the playoffs. If you don’t believe him, he’ll break your damn neck with his bare hands!

• New official player of The Links?

• A 99-year-old Pacers fan received an autographed picture of Reggie Miller from his agent’s office. Aww…