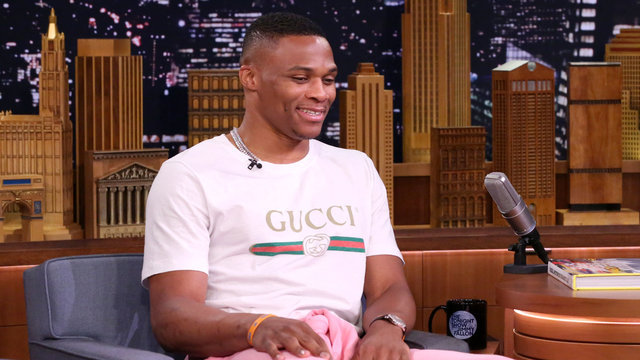 Russell Westbrook was Jimmy Fallon’s guest on “The Tonight Show” Monday, but came up short in an “NBA Jam” duel with the host.

Russ appeared on the show to promote his new book, an opportunity Fallon used to gently mock the reigning MVP for his taste in clothing.

Fallon suggested a few came up with an interesting nickname suggestions for Westbrook and new OKC Thunder teammate Paul George.

Westbrook spent six mostly silly minutes on screen, promoting his new book “Russell Westbrook: Style Drivers.” Rocking a Gucci t-shirt and a pink sweatsuit with the top tied around his waist, Westbrook called his mother “my style inspiration.” He laughed as Fallon showed him Photoshopped images of Fallon in some of Westbrook’s most fashion-forward outfits.

Fallon suggested “RuPaul” as a nickname for the new Thunder duo of Westbrook and Paul George.

Westbrook laughed and said, “I see a lot of shaking heads. I don’t think people liked that.” Then Fallon made a second suggestion – “Thundercats” – that included a mocked-up picture of characters from the animated show in Oklahoma City jerseys.

“We may come back to that name,” Westbrook said.