J.O Could Go Into Shutdown Mode 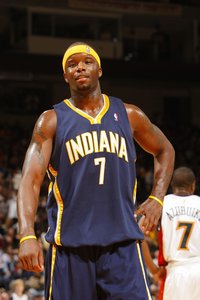 Jermaine O’Neal is having the worst season in a Pacer uniform since his first year in Indy. It has been an ugly, injury-plagued, up-and-down campaign that had some (legitimately) arguing that the Pacers were better off without their power forward.

O’Neal is now considering sitting out the remainder of the year to get his left knee fully healthy.

“That’s really the prime option for me,” O’Neal said Sunday afternoon, of sitting out the rest of the season. “We’re going to rehab now like it was the summer, with an extensive rehab. If that consists of a month or the rest of the season, I need to take the necessary steps to not come back on something that’s not really healthy.”

I guess we can now put those Vince Carter-for-Jermaine O’Neal rumors to rest. Until next season, that is.