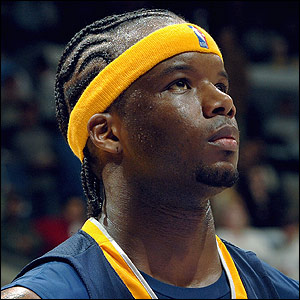 Indiana Pacers star Jermaine O’neal had a bit of a fit last week, basically saying that if the perpetually average Pacers don’t get their act together, he doesn’t want to be part of the team anymore:

“We’re a very average team right now,” O’Neal said. “We’re going to be average until we decide as players that we want to win and do the right things we’re supposed to do to win. If we don’t do it, we’re going to mingle around .500, get in the playoffs and then be out.”

“I’m getting to the point, I’m in my 11th year, I don’t want to play 82 games and then exit to watch somebody else pop champagne…If I can’t take this team to another level, I truthfully believe we should go our separate ways at the end of the season.” O’neal added.

OK, two questions immediately come to mind when I read those quotes from O’neal: 1)What took him so long to explode; 2)Did he really expect things to be going better in Indy?

I’m really surprised that J.O. took this long to let out his frustrations, considering that management really didn’t do much over the summer to improve the team–Marquis Daniels and Al Harrington, please don’t take this personally. It was pretty obvious from the get-go that this squad was going to hover around the .500 mark for the season (as they have the past two seasons), and probably face a quick exit in the first round of the playoffs.

Pacers CEO Donnie Walsh did nothing to lighten the mood when asked about O’neal’s comments:

“I think he’s played really well and if the time comes for [talking about O’Neal’s future], then that will be the time. We’ll see,” said Walsh. “We’re going through a difficult part of the season. I’m frustrated, the coaches are frustrated on occasion and the team is frustrated.”

O’neal, who’s clearly the face of the organization and is putting up his usual solid numbers (19 and 10 after 29 games), most likely won’t be traded anytime soon. However, the possibility of a trade happening sometime down the road isn’t out of the question. As Indy Star writer Mike Wells pointed out over the weekend, J.O. has the option to opt out of his contract at the end of next season and leave the Pacers with nothing to show for it.