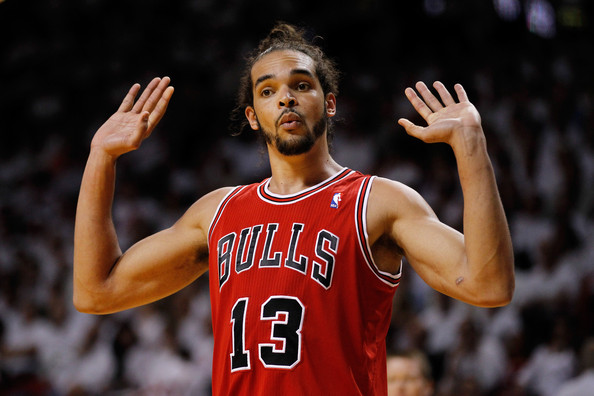 Joakim Noah is an MVP candidate this season, whether he likes to hear it or not.

Deafening chants of “MVP!” rang throughout the United Center on Sunday, as Noah — who finished with 20 points, 12 rebounds, 7 assists and 5 blocks — led the Chicago Bulls to an emotional 95-88 win against the rival Miami Heat.

Following the game, Joakim explained that the Bulls’ true and only MVP is Derrick Rose.

“Because our MVP is not playing. We have one MVP, and that’s Derrick Rose. And it’s not about MVPs, it’s about rings, and one day I hope that we can get one here.”

“That’s all I want,” Noah said of winning NBA titles. “I don’t care about none of that stuff [MVPs].”

Against all odds, the Bulls have once again more than held it together with an injured Derrick Rose watching from the sidelines, largely thanks to Joakim Noah.

The All-Star big man has put up 12.2 points, ripped down 11.3 rebounds and handed out 4.8 assists, while dragging Chicago to a wholly unexpected 35-28 record.

Derrick Rose may be the best player on the roster, but he isn’t available right now. Joakim Noah is indisputably the Bulls’ rock and leader.

Better get used to hearing those MVP chants, Jo.