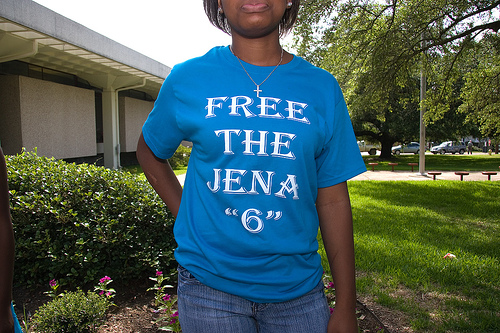 We the undersigned members of the sports community call for the egregiously punitive criminal charges to be dropped against Mychal Bell, Carwin Jones, Theo Shaw, Robert Bailey Jr, Bryant Purvis and Jesse Beard, also known as the Jena 6. We don’t call for this because all six young men are accomplished athletes in their own right, but because this case is drenched of the worst double standards and excesses of the criminal justice system.

The story by now has become well known. It started in September 2006 at Jena High School in Central Louisiana, where three lynching nooses were hung from a tree after black students dared sit underneath what was known as “the white tree.”

Tensions escalated over the course of the semester with resulted in several altercations. Last December six African American students were involved in a school fight in which a white student suffered a concussion — but was able to attend a school function that same evening. They were subsequently charged with attempted second-degree murder and conspiracy, charges that would put them in jail for a combined 100 years without parole. The Jena 6 range in ages from 15-17.

One of the Jena 6, Mychal Bell was found guilty in less than two days by an all-white jury. He was convicted of aggravated battery and conspiracy charges and faced up to 22 years in prison. His original sentence has since been thrown out, ruled unconstitutional since he was tried as an adult. Recently, the prosecution has announced that charges against Shaw and Jones have been reduced and we are grateful that Mychal Bell’s initial conviction was dismissed. That is precisely why now is the time to keep up the pressure and get all of these ridiculously punitive charges dismissed as well. We stand with the thousands around the country who marched on September 20th to just say no to double-standards and racism in the criminal justice system.

Anthony PRIOR
Former NFL Player
Author Slave Side of Sunday

David MEGGYESY
Former NFL Linebacker
Author Out of Their League