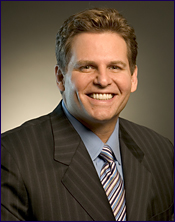 While the NBA All-Stars were being grilled by 25 reporters at a time yesterday, I found the unofficial mayor of the weekend for a very quick Q&A. Sacramento Kings co-owner Joe Maloof, the blonde Jason Giambi-looking Maloof brother, was fielding questions from the press about the game being in Vegas and plans to move a team here.

Lang already posted his Q&A with Oscar Goodman, the mayor of Las Vegas. This weekend the mayor is the Maloof brothers. Casino owner, whose credential read “GOVERNOR.” I guess that has to do with the board of governernors you hear so much about.

I jumped in after a reporter from Sacramento gave Joe the business about how if he were to move the Kings out of Sacramento, it would be messing with his livelihood. That got a little, as they say, contentious. Thankfully, the next line of questioning came from someone from TNT, so it was all about Barkley vs. Bavetta. Finally, I had my opening, and since I assumed Maloof would be a carnival barker type, I tried to get him to say something crazy and move on. Three questions and then I let him go.
SLAM: Do you feel added pressure to make this weekend the most exciting entertainment spectacle in the history of sports?

JOE: Well it’s exciting when you come in from the airport you see what they’ve done here. You see the jersyes they put on the stature of liberty and lion, the wraps around the buildings. This game is larger than life right now. The lobby’s mobbed with thousands of people. Yao Ming walks through the casino and all of our dealers run after him. Nobody’s dealing the cards!

SLAM: Do you want to make a prediction for how, in context of the greatest sports and entertainment spectacles ever, this one will be?

JOE: My hopes is that people have a great time and enjoy themselves, get to touch and see NBA basketball, see the best athletes, the best players in the world. And I want the ball players to enjoy themselves. I want to show the world what Las Vegas can do.

SLAM: And how about the basketball purists?

JOE: Well, the entertainment is going to be huge. The big names, the excitement, and the stars are everywhere.

He was tired, what can I say? He was also dripping with sweat. I expected more BLUSTER!

For another Q&A with a big dog, here is the The Big Lead’s interview with Ben Osborne.