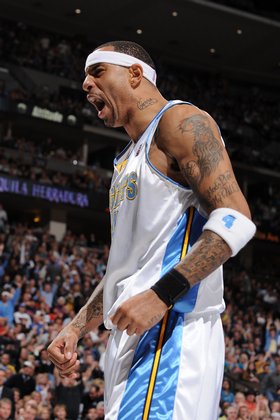 Spencer Hawes injured his left knee on Monday night, and will wisely sit out the season finale this evening in Minnesota. The injury isn`t deemed too serious, but don`t try and tell that to one of the men who signs his checks, Joe Maloof.

The Kings` co-owner is very upset with Kenyon Martin, since his foul on Monday led to Hawes`s injury. Maloof wants Martin to pay, or at the very least, apologize for his actions.

From the Sac Bee:

“That was thuggery,” said Maloof, the Kings’ co-owner, “and you can quote me on that. Kenyon Martin wasn’t trying to block the shot. He went right at Spencer when he was running full speed and at the (height) of his jump, when he was most vulnerable.

“Completely unnecessary. The Nuggets might not want to hear this, but there was no excuse for that, and he (Martin) needs to apologize to Spencer and our organization. That just wasn’t right.”

This, of course, is the second complaint from the Kings regarding Denver from that game.

Though Joe Maloof said he was going to bring up the incident at the NBA board of governors meeting, it`s highly unlikely that K-Mart will face any sort of punishment from the League.

I wouldn`t hold my breath waiting for that apology either, Joe.