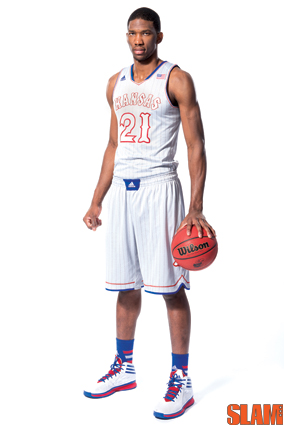 Jabari Parker was anointed “The Best High School Basketball Player Since LeBron James” in May of 2012. He was tall, he was talented and he was ready to take on the world.

While Parker’s legend was being born in Chicago, IL, a teenager named Joel Embiid was about to enroll in The Rock School in Gainesville, FL. Embiid was tall, too, but he was a newcomer to the game of basketball, and he was barely ready to take on high school competition let alone the world.

This is what makes Embiid, now regarded as the potential No. 1 pick in the 2014 NBA Draft, one of the most fascinating prospects in recent memory. Star basketball players are supposed to play from the time they’re 4 years old. They’re supposed to go to elite summer camps, tear up the AAU circuit and devote their entire life to basketball. They’re supposed to make JV as a middle school student and varsity as a freshman, garnering interest from colleges the entire time.

That’s not what happened with Embiid. He began playing basketball around the time Parker began getting national attention, which makes his meteoric rise even more amazing.

Comparing Embiid to Hakeem Olajuwon is a bit unfair, just like comparing a college-aged kid to one of the greatest basketball players of all time is unfair.

The parallels between the two, however, are hard to ignore. Olajuwon picked up the game relatively late, choosing instead to play soccer until he was 15 years old. Once he started playing, he improved incredibly fast, and by the time he finished his collegiate career, he was a No. 1 pick in the NBA Draft.

Embiid is following the same trajectory. As with the Nigerian-born Olajuwon, who first excelled at soccer, another sport prevented this native of Cameroon from getting into basketball.

“I was playing other sports like soccer and volleyball,” Embiid says. “Basketball is not really big back home. Soccer’s really big, so everyone wanted to play soccer and I was playing soccer, and then I played volleyball. I started watching NBA games, and I just really loved the game. It was unbelievable.”

His skills as a volleyball player have helped make Embiid  perhaps the most intimidating shot blocker in all of college hoops. Standing 7-0, with a 7-5 wingspan, Embiid would be a devastating shot blocker, regardless. Throw in the footwork and timing he honed as a volleyball player, and it’s  no wonder he has anchored Kansas’ defense this season, with Jayhawks coach Bill Self calling Embiid “the only rim protector we have.”

“Offensively he’s gonna continue to get better, but his feet are like Hakeem’s,” Self says. “I don’t know if I’ve ever seen anybody with feet like Jo’s.”

The first time Justin Harden saw Embiid play, he knew he was special.

“I thought, This kid’s a pro,” says Harden, the head basketball coach and athletic director of The Rock School, where Embiid spent his senior year of high school. “I don’t know how long it’s gonna take, but I thought this kid is the most talented and special 7-footer that I have seen in a while.”

It’s not every day that a potential star from across the globe falls into your layup line. Luckily for Harden, that’s exactly what happened.

In June of 2012, Harden received a phone call from  Minnesota Timberwolves’ forward Luc Mbah a Moute, an  alum of Montverde from Cameroon who was instrumental in bringing Embiid to America.

“He said, ‘Hey, we’ve got this kid, we’re looking to move him, we’re not really happy about this situation at Montverde but more importantly we want to get him in a place where he can possibly grow as a player,’” Harden recalls.

Harden admittedly didn’t know who Embiid was or anything about his game. In fact, Harden didn’t watch Embiid play until “late July or early August” of ’12, when he hopped on YouTube and watched clips of Embiid playing.

Eventually, Embiid enrolled at The Rock School in August, and as a senior he averaged 13 points, 9.7 rebounds and 1.9 blocks per game for the Lions.

This translated to unprecedented success for the school. In Embiid’s lone year in  Gainesville, The Rock School won more than 30 games for the first time in its history and won the Sunshine Independent Athletic Association state championship. Embiid had 10 points and a team-high 14 rebounds in the win. “Joel was a huge reason why [we were successful],” Harden says.

When you’re a supremely talented 7-footer, with soccer-caliber footwork and enough potential to make any coach salivate, you’re obviously going to have basketball teams from around the country battling for your services. For Embiid, that was no different. Nine schools offered him scholarships: DePaul, Florida, Kansas, Louisville, Marquette, Texas, UCLA, Virginia and Wake Forest. That list was whittled down to three—Florida, Kansas and Texas—and in November of 2012, Embiid verbally committed to Kansas, joining a long line of solid big men to pass through Lawrence in recent years.

Over the course of the following months, with the additions of five-star recruit Wayne Selden and No. 1 prospect Andrew Wiggins, the recruiting class that Embiid was a part of became one of the best in the nation. Those three players were a major score for a Kansas team that had lost its five top scorers from a year before, including the No. 7 overall pick in the 2013 NBA Draft, Ben McLemore. (That’s not to say the cupboard was bare: promising sophomore forward Perry Ellis and junior guard Naadir Tharpe were returning.)

“I like it [here], because at Kansas someone like Andrew [Wiggins] is so talented and so good, or someone like Wayne [Selden] or Perry [Ellis], everybody can score, everybody can do anything,” Embiid says. “Other players don’t really pay attention to me.”

Bill Self has coached a bevy of great college big men in his career. He’s seen guys like Cole Aldrich, Marcus and Markieff Morris, Thomas Robinson and Jeff Withey. While all of them did work on the hardcourt and piled up the hardware, Embiid’s raw talent makes him perhaps the best big man that Self has ever coached.

“The thing that those guys had on him was a little bit more swagger to their game than what Jo does, in a large part because Jo’s young,” Self says. “Give Jo a couple more years and he’ll have that.

“But as far as a raw talent standpoint, I love the kids I’ve coached and they’re good players,” Self continues. “But there’s not been anybody that we’ve coached like him.”

Like Harden, Self remembers the first time that he saw Embiid play. He wasn’t as impressed, but for good reason: The first time he saw Embiid, it was with his AAU squad, Florida Elite, where Embiid was flanked by fellow five-star recruits Chris Walker and Kasey Hill.

According to Self, he went to see Walker and Hill, and Embiid didn’t make a major impact. But the first time Self saw Embiid play for The Rock School, he was “blown away.”

“I told our assistant, He’ll be the best big man we’ve ever had if we can get him,” Self says. “Certainly he’s already that.”

Embiid started the season on the bench for the Jayhawks, not picking up his first start until nine games into the season, when Kansas traveled to—of all places—Gainesville to take on Florida. His performance in that game wasn’t anything special: 6 points, 6 rebounds, 3 blocks and 2 assists in 30 minutes in a 67-61 loss.

Since then, Embiid burst onto the national scene and has already set a freshman blocks records for Kansas and has become a legitimate candidate for the National Player of the Year award. Embiid has averaged 11.1 points, 7.9 rebounds and 2.6 blocks per game on 62.4 percent shooting from the field. Which is really good. Until you remember that he’s still learning the game. Then it’s just absurd.

This has brought Embiid more attention than he ever expected. And while guys like Wiggins have been in the national spotlight for years and know how to handle it, Embiid is learning on the fly.

“Joel’s never experienced any of this,” Self says. “Considering the different pressure that he’s under and considering he doesn’t have anything to draw from personal experience on how to handle certain situations, I think he’s done remarkably well.”

Embiid still has some time before his college career ends, even going as far as to say that he’s strongly considering staying for his sophomore year.

“One day I was talking to Coach Self and I was like, ‘Yeah, I don’t even know how to drive yet.’ Eating healthy, I don’t know how to do that yet,” Embiid said in an interview with ESPN’s Dana O’Neil. “I don’t know if I feel like I’m ready for all of this.”

No matter how long he stays in Lawrence, Embiid knows that all that matters there is winning. He gets that it’s not about individual accomplishments at Kansas, it’s about championships. The Jayhawks have won 10 straight Big 12 regular-season championships and three of the last four conference tournaments. Embiid knows this, and Embiid is embracing this.

“At Kansas, we’ve won 10 Big 12 championships in a row,” Embiid says. “No one wants to be that team that didn’t win. That’s the thing: win championships and try to win the big game.”

The Jayhawks have locked up this season’s Big 12 regular-season title, and it would be a surprise if the team didn’t lock up the conference tournament title. While it’s not all because of Embiid, according to Self, his value to the team cannot be overstated.

“He’s vital to us and so we can be as good as we could be,” says Self. “And when you stop and think about it, if you’re projected to be a top 2 or 3 pick in the NBA, and you take that away, what team wouldn’t that hurt?”

The potential payday that comes with the NBA will loom over Embiid for the rest of his collegiate career. Maybe he won’t declare this year. Maybe he’ll stay in school until he’s a senior, wait until he gets his degree and then enter the Draft.

The most likely scenario, of course, is that Embiid declares sooner rather than later. ESPN and Draft Express rank him the No. 1 Draft prospect in 2014. In fact, you’d be hard-pressed to find a respected NBA Draft expert who doesn’t have Embiid  at No. 1, let alone their top three.

It’s not hard to figure out why—Embiid is one of the best college players in America at  a position that is always in need. The list of NBA squads that wouldn’t take a soon-to-be 20-year-old center who oozes potential is as short as Embiid is tall.

Beyond the potential and the upside and all the other things that teams love, there is one thing that Embiid possesses that truly makes him a rare prospect. No matter how good he is, no matter how much he has improved in only three years, the Cameroonian wants to continue to work to get better.