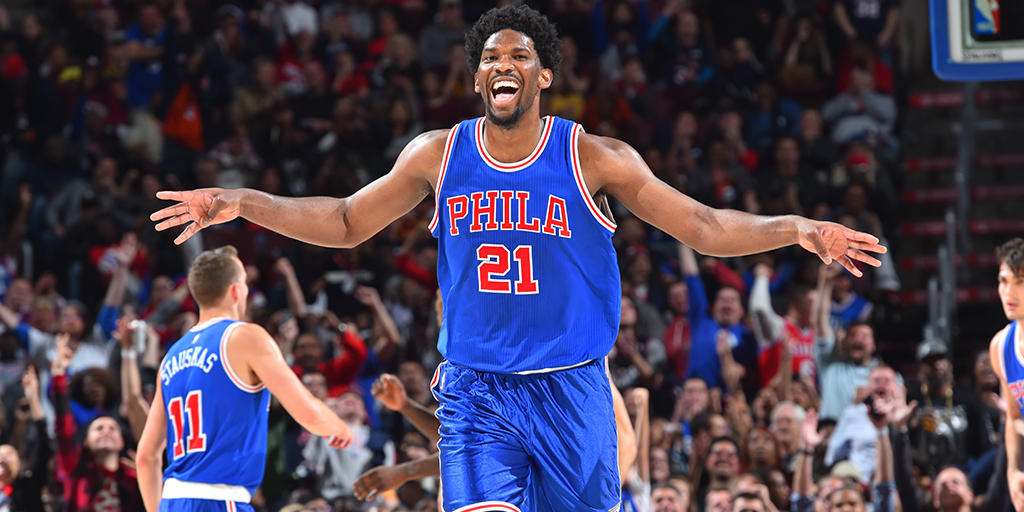 When healthy Joel Embiid is a top-3 center in the NBA. When healthy Joel Embiid might even be the best center in the NBA right now, as in this current moment, better than the proven guys, better than whatever foppish but beautiful touch pass Nikola Jokic can pull off, better than a DeAndre lob in traffic because the man is a dynamo. He is, from the 31 games of professional bliss that we have witnessed, capable of all of those things, plus the end of human suffering, and also a consistent 3 from the top of the key.

It’s Gobert and Cousins and When healthy Joel Embiid. That’s it.

People with podcasts keep talking about When healthy Joel Embiid as if he’s Michael Jordan, and that’s a little much. That needs to stop. But when Christine Embiid brought When healthy Joel onto this planet 23 years ago, she probably saw some Hakeem in him pretty quickly. She probably saw some peak skinny Shaq, thundering like a truck with the breaks cut for a putback on a fast break. She saw what we saw.

You can put the team on his back, and it might snap his meniscus and foot in half again, but you will be terrifying in the euphoric interim.

Injury riddled Joel Embiid is like that childhood friend who fixed your Sega Saturn, no questions asked, no money changed hands, but you saw him strangling chipmunks in the backyard that one time and you figure it’s only a matter of time. That kid is going to burn down an enemy’s summer house in Cabo San Lucas and charge the airfare to your credit card. Injury riddled Joel Embiid and that kid are ticking timebombs, but what are you gonna do? Not have a Sega Saturn?

You must roll with the joy as it comes. When healthy Joel Embiid is flanked by a veteran shooter, JJ Redick, who is being paid about $100,000 per three-pointer. That is real math. Robert Covington is some sort of combo Jesus/Beyonce figure for the discerning Analytics Bro. There are still some lifers out there who believe Ben Simmons has Magic Johnsonian tendencies, and LeBron James is one of those lifers.

Markelle Fultz certainly seems like he’s going to haunt, punish and send weird letters to Danny Ainge for the rest of his life, so that’s at least two wins right there. I am also required to say nice things about Dario Saric here, whom some very intimidating-sounding Trust The Process people have decided is more Danilo Gallinari than Ersan Ilyasova. I value my life too much to question them.

Basically, he’s in very good shape, personnel-wise. When healthy Joel Embiid reminds me only of the most dominant physical players I can think of. He also plays with the energy of a hockey goon.

This has proven to be a dangerous cocktail on a team with no timeline. It has split him in half. The team has a timeline now. The next decade in Philly lives or dies on whether Joel Embiid can keep it together.

Previous Rankings:
This is Embiid’s first appearance on the #SLAMTop50.