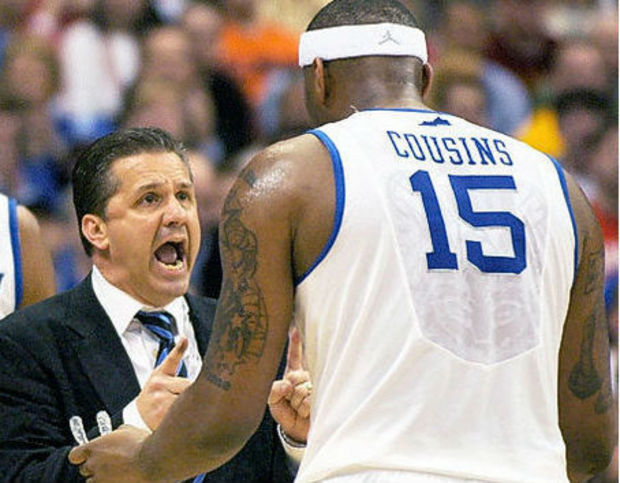 University of Kentucky head coach John Calipari was quick to refute a published report Tuesday morning, denying that he has any conversations with the Sacramento Kings about taking over for the embattled George Karl.

.@Vivek has asked me what I thought about @boogiecousins and I told him he would be an all-star, and I was right.

At no time has @Vivek offered me a job. I WILL BE AT KENTUCKY.

For now, Coach Cal says he’s perfectly content to remain in Lexington, where he inked a seven-year, $54 million extension a year ago:

Calipari has been communicating with owner Vivek Ranadive and other members of the Kings’ ownership group in recent weeks, league sources said. Calipari has listened to scenarios with which the Kings could offer him complete control of the franchise’s fledgling basketball operations to go along with coaching, league sources said. […] No formal offer has been made to Calipari, and Kings ownership understands that it will take a multiyear financial package of $10 million-plus annually to get Calipari to seriously consider leaving Kentucky, sources said.

In recent weeks, Sacramento ownership’s intrigue with Calipari has only grown with the dissolution of the relationship between All-Star center DeMarcus Cousins and coach George Karl, sources said. […] Calipari coached Cousins at Kentucky for a season in 2009-10, and Ranadive believes Calipari could help serve as a mechanism to convince Cousins to back away from his desire to be traded to the Los Angeles Lakers, sources said. As much as anything, Calipari represents one more potential change of direction, as well as a public-relations splash for Ranadive.

Sacramento ownership, dismayed over Karl’s fractured relationship with Cousins, has had lawyers studying Karl’s contract, trying to determine if there’s a way to terminate him for “cause,” and free themselves of the three years and nearly $10 million left guaranteed on his deal, league sources said. If the Kings cannot convince Calipari to come to Sacramento – or never make a formal offer – Karl could simply remain as coach. […] Sacramento’s case on trying to get out of paying Karl his contract would be based in part on his involvement in mounting a campaign to get Cousins traded, sources said. The possibility of getting Karl ousted without pay is remote.