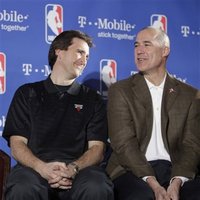 The Chicago Bulls are fighting tooth and nail to sneak into the postseason. They are also, reportedly, fighting each other.

A report came out last night alleging that Bulls VP John Paxson shoved head coach Vinny Del Negro in the chest twice following a Bulls loss in Phoenix on March 30th. The disagreement was over Joakim Noah’s minutes, something that continues to be a hot-button issue in Chicago.

After a loss to the Phoenix Suns on March 30, an irate Paxson walked into the coach’s office at the United Center and confronted Del Negro over a narrow breach of a management-imposed minutes limit on injured forward Joakim Noah(notes). Sources said Paxson first grabbed a hold of Del Negro’s tie and seemingly tried to provoke him with two successive jabs into his chest. Paxson was even heard to angrily challenge Del Negro to a fight.

There were several staff members present, sources said, and assistant coach Bernie Bickerstaff stepped between Paxson and Del Negro and pulled Paxson away.

Sources said Del Negro did not retaliate, mostly out of fear the incident could be used to void his contract without pay or hurt future career opportunities elsewhere. The Bulls have dispatched lawyers to interview witnesses about the incident, sources said.

Del Negro — a man who has been on the proverbial hot seat for what seems like forever now — smartly danced around reporters’ questions about the incident last night.

Vinny won’t be the only one getting scrutinized by upper management this offseason in Chicago; following this embarrassing incident, Jerry Reinsdorf and company will also need to decide if John Paxson is the right man to lead the franchise going forward.