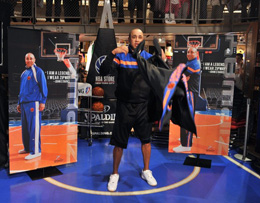 John Starks understands the value of an athlete’s pregame preparation. He played in 962 NBA regular season and Playoff games combined and for every one of those contests, he had to run through a pregame layup line. And as he tells it now, he never felt comfortable with the tearaway pants he had to sport while in those layup lines. So he came up with an answer that could benefit not only basketball players, but athletes in nearly any other sport.

In 2007, Starks co-founded Zipway, a line of sports gear which include pants w

ith exposed zippers on the sides and Velcro pull tabs that let a person effortlessly zip away their pants.

The former Knicks star showcased the ease with which he could get in and out of the pants in front of NBA fans at an NBA Store event this week which celebrated the store’s week-long Spring Jam.

With pants, shooting shirts, shorts and jackets all sporting an official NBA license, Starks feels the zipper-laden line of sports gear will become a mainstay for athletes of any trade. Starks spoke with SLAMonline about Zipway and his thoughts on the NBA today at the Spring Jam event.

SLAM: How did Zipway begin?
JS: It was really a stroke of luck. My business partner came to me after speaking with a guy who was shopping for people interested in the Zipway idea and said this was something very special. He sent it to me and told me to zip them off. As soon as I zipped them off I was like, “Ohhhh, OK, I get it.’

SLAM: Did you not like the tearaways in the NBA?
JS: No, they were difficult. You try to line up the buttons and sometimes they might pop, so you have that gap in your pants. As players, you like your legs to stay warm and with the buttons you got those air pockets in there. With these, you don’t have that. And if you want your legs to get some air, you can unzip and they won’t go anywhere until you pull them off.

SLAM: What group of athletes have given the strongest positive response to this?
JS: It’s really been all groups. The younger group obviously because they’re so used to change and they like new products. They quickly adapt. The older group likes the technology and they’re excited about it but the younger group really likes the excitement of it.

SLAM: This is definitely adaptable for a lot of sports.
JS: Basketball is obviously a gold mine. Soccer is another great sport for this. You look at soccer player and now, they don’t like wearing breakaway pants. But they like keeping their legs warm because they have to play in cool weather sometim

es. You see when they get through warming up during a game, they have to sit down to take their pants off. In this you don’t have to sit to take ’em off. Track and field is ideal for it. And tennis.

SLAM: What sport would people be surprised to find has athletes who find Zipway really useful?
JS: Swimming. We had a guy who was competing on the Olympic swimming team who wanted to wear them. The reason he liked them was because they like keeping their legs warm before they get in the water. And he told me he could literally zip them off poolside right before the referee says ‘On your mark.’

SLAM: What’s been the reaction from NBA players?
JS: They love it. Obviously adidas makes their on-court apparel so we can’t get this on the court but hopefully one day we can join forces.

SLAM: Was it a goal to sell Zipway gear at a lower price point?
JS: Yeah, we wanted to make it affordable. We want kids to wear this from a young age. Our goal is to make them not even understand what a button is. That’s a relic.

SLAM: Are you playing any sports these days?
JS: I play golf, that’s my sport. I got a bad hip that prevents me from running up and down the court. So right now golf is a lot easier on me.

SLAM: Do you still watch the NBA?
JS: Oh yeah, I watch it all the time. It’s still exciting to see how the League has transformed.

SLAM: Do you wish there was more trash talking and physical play like during your heyday?
JS: [Laughs] You know what, for me that was the fun part of the game. Guys were hitting each other, they were going at each other. It really brought out the intensity in guys. Do you have that same type of ferocity that we had back then because of the way rules were then? No. But the game is still exciting and it shows the skill levels of guys today.

SLAM: What current player or players would you most like to compete against?
JS: Definitely LeBron, DWade, those guys. Carmelo. Kobe, I played against him. But those guys are taking the League further and then you have young guys like Derrick Rose. He’s an exciting player. It’s great to see the League’s growth and where it’s heading.

SLAM: Good hip or bad hip, could you win the All-Star three-point contest?
JS: Oh, yeah, with a good hip. [Laughs] Not with a bad hip.

SLAM: So tell us, what are your long-term goals for Zipway?
JS: Just to get it everywhere. I think in every sport — college is definitely an ideal situation for it. That’s all college kids wear, are sweats. To be able to get in and out of these clothes very easily is an ideal situation. With this panel, you can do everything. We can print sororities, fraternities, we can customize it any way you want it. High school would be ideal, especially with their budgets. They can usually buy only one pair of pants.

We hope the consumer enjoys the product. We think we have something very special, something that’s new in the industry. The NBA is excited about it and we just want to continue to put out a good product.