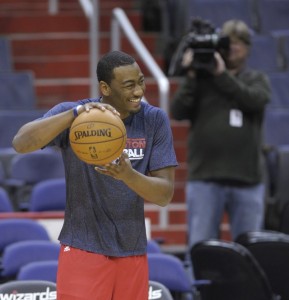 Washington Wizards star point guard John Wall has vowed to make his season debut this month. He took a step in the right direction yesterday, taking part in his first practice that featured contact since a stress injury to his left knee sidelined him back in September.

Though excited about the third year guard’s progress, Wizards head coach Randy Wittman isn’t about to rush him back.

Per the Washington Times and WaPo:

As he jogged off the court Thursday, Washington Wizards guard John Wall was wearing a jersey, not a T-shirt. It’s a telltale sign that he participated in practice, as opposed to doing what coach Randy Wittman likes to call “dummy” drills. Wall declined to speak with reporters, but Wittman didn’t seem to mind, especially now that he can finally say the words “John Wall” and “practice” in the same sentence. “He did some live contact today, as did Trevor [Ariza],” Wittman said. “You could see the excitement in [Wall‘s] eyes to reach that point. It was good. That’s a positive, trust me. Now we’ve got to get him in shape. That’s the main thing. He’s been out a long time.”

“We’ve got to make sure he’s in good condition,” Wittman said. “He can’t go out there and hurt himself from a calf muscle or a hamstring or something. We don’t want to set ourselves up for that.” […] Wittman mentioned the need for Wall to regain his conditioning and strength, but Wall’s teammates were much more encouraged by what they saw from the former No. 1 overall pick. “He’s still the same player. Fast. Aggressive. He looked good. Looked like his old self,” said A.J. Price. “He was extremely active. Just talking. You could see that he really wanted it. He wanted it. And that’s always good to see, especially from your franchise player, coming back off injury, to show how enthused he was to be back out there and how aggressive he approached the situation.”

At 4-26, the Washington Wizards are the NBA’s worst team, and going nowhere fast. But with John Wall getting healthier, a very mild sense of optimism among the fanbase would be justified.