Jonathon Simmons talks about his long and winding journey to the League. 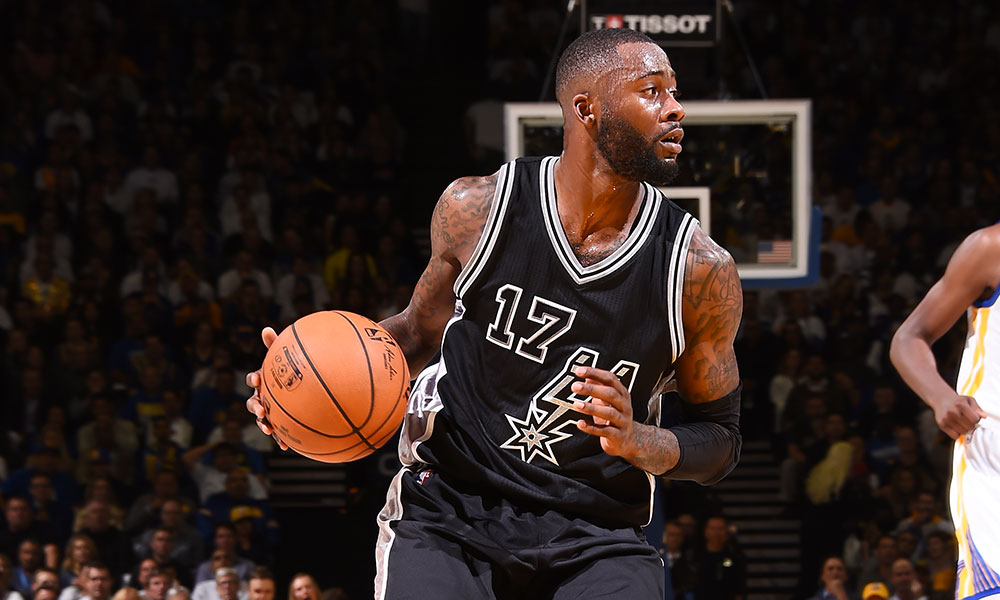 Jonathon Simmons is far from your average second-year NBA player. The 27-year-old has had a long and winding road to the League, playing for two colleges and two semi-pro leagues before securing a guaranteed contract with the Spurs before the 2015-16 season. He’s here now, ready to make a significant impact for the retooled, Kawhi Leonard-led Spurs.

The University of Houston alum averaged 6 points in his 55 games last season but his on-court responsibility grew more and more as the season went on. He began as a 3-and-D player, only allowed to space to the corner. Then Spurs coach Gregg Popovich started entrusting him with guarding opposing team’s best second-unit scorers. Then he started to lead fast breaks. Then he was guarding Stephen Curry. Now he’s pinning Steph’s shot against the glass.

His NBA career has taken off quickly, and after last night’s eye-catching 20-point, 4-rebound, 3-assist performance (highlights above) against the Warriors, Simmons is only going to get more attention from here on out.

We spoke with J-Simms last week about his come up, his rookie season and what’s in store in year two.

SLAM: You’re in the League now, but you played with the Sugar Land Legends of the American Basketball League. What was that experience like?

Jonathon Simmons: It was a grind. I was playing basketball, so it was fun. All of the grind, it’s part of it. At that time, I really didn’t know what to expect. I was just doing it because it was there. It was fun, it was a grind. We traveled on a 12-passenger bus and our own cars to games. Those rides were always fun. I just took it for what it was. I tried to stay positive through the process because I really wasn’t sure where my life was going to go in basketball.

SLAM: You were averaging over 36 points a game back then. How did you keep going even though you were playing at such a high level?

JS: I had 62 the very first game I played (laughs). It was clear that I could play, but it was just about opportunity.

SLAM: You’ve translated that into a contract with the Spurs, one of the best organizations in sports. Was there anything that surprised you when you joined the squad?

JS: I’m learning a lot over here, just how to be a professional. I still be like, ‘Yo, I’m in the League, I’m about to play such and such.’ And this is my second year, after I’ve been watching it for so long. Like, Pau Gasol, he’s cool as shit (laughs).

SLAM: You had that game in Milwaukee last season where you scored 18 on 6-7 shooting. Just over and over, getting to the bucket.

JS: I just was playing. I saw one go in, and another. I’m a scorer, so you see a couple go in and you’re feeling good. And the adrenaline of being in the NBA.

Me and Khris Middleton worked out a lot during the Draft process. We was going at it big time. Kent Bazemore. Them guys know, seeing me now that I’m here. That’s always a chip I got on my shoulder.

SLAM: Were you talking some shit to Khris when you were giving him buckets?

JS: (Laughs) Nah, nah, never. I always praise guys and appreciate the grind, try to respect each and every player.

SLAM: One of the things that people who don’t watch you play every night might not realize is that you’re not just an athletic defender. You understand angles, when and where to cut, when to dig down for double teams. Where did you develop your basketball IQ?

SLAM: Who were some of the guys you watched when you were growing up?

SLAM: Take us back to Summer League when you put it through that dude’s legs.

JS: To be honest with you, it was an accident. But I just played it off like it wasn’t (laughs).

SLAM: Look back on your entire journey, from the Legends, to the D-League, to the Spurs, and everything in between. Is there a moment that you still can’t believe or a game that you can still feel?