Jordan Brand at the Rucker 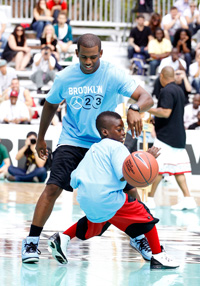 After catching the opening night festivities at Radio City Music Hall (the mean alley to Chandler to win it in sudden death overtime was ill and then Jay Z killed it with his performance), one thing’s for sure: Nike knows how to put a basketball event together.

But even I was skeptical about hitting up Rucker Park at o’dark thirty the next morning. But hey, it was for the kids. So I trudged up to Harlem from Brooklyn via the subway after the rooster sang his tune. I was obviously incre

dibly sleepy after staying out past productive hours, but once I got to the Rucker, I immediately shook it off.

The set up was amazing. Nike really pulled out all the stops and transformed the park into a colorful, basketball extravaganza, complete wtih exhibits, activities and entertainment.

It was 8 a.m., but already scores of kids were running drills on the makeshift hardwood. They were graduating from the Breakfast Club Series, a 10-week training program designed by Jordan Brand to encourage young athletes (ages 10-16) to push themselves to the next level of athleticism and competition.

The BC was originally created by Michael Jordan and his über trainer Tim Grover after the ‘89-90 NBA season. The workouts were designed to help improve the stamina and energy required to sustain peak performance throughout the rigors of an entire season in the L.

Back then, Mike and Chicago Bulls teammates like Scottie Pippen (congrats on getting in the HOF, Scottie) would take part in early morning workouts at MJ’s house and have a complete breakfast prepared by Mike’s personal chef. The “breakfast” became a calling card for Jordan’s dogged determination and passion for the game and showed how much he’d push himself to the limit to compete at the highest level. The Bulls one the first of three consecutive titles that next year after the breakfasts began, so it’s probably safe to assume that no one ever questioned its validity.

Since it was such a great tool for MJ, he wanted to pass it along to the kids. The kids who participated in the program were selected by the Harlem Boys & Girls Club, the Harlem Urban League and the Harlem YMCA. The kids might have well been in a candy store because Jordan Brand brought out its biggest stars to congratulate them on a job well done and help them with drills on the court: Carmelo Anthony, Chris Paul and Dwyane Wade. The Team Jordan three played defense while the kids ran fast breaks. It was fun to watch, even if DWade and Melo blocked their shots with reckless abandon.

The true hightlight, though, was the surprise appearance by his airness himself, “Air” Jordan. Decked out in the new powder blue Js and warmups, MJ came out to rapturous applause and congratulated the kids (OK, I’ll admit I was glassy-eyed, too and the MJ sighting—I did grow up watching and admiring the guy as he straight up embarrassed anyone who had the audacity to lace up some sneaks and try to D him up).

After the kids got their

certificates for various achievements, I caught up with CP3, Melo and Wade to get their thoughts on the BC. Here’s what they had to say:

“Coming out here in the morning I think you can just see it,” Paul said. “Anytime we get a ball in our hands we just wanna hoop. We still have the same passion for playing basketball. That’s what loving the game is for kids. It’s a love and passion for the game that can’t be explained.”

“Being able to wake up and knowing I have a court to go play basketball, that was important,” Anthony said. “And getting in trouble for bouncing ball in the house growing up.”

“We really enjoyed it,” Wade said. “To get in the drills with the kids, it’s gonna be something they’ll remember for a long time to come. They always gonna be able to say I had fun playing with Melo, CP and Wade and they’re gonna tell stories, like the one kid that ripped CP. He’s gonna go tell that story.”

“Stop telling those lies,” Paul said. “Ain’t nobody get it on camera, so it didn’t happen.”

“But it’s awesome for the brand to do something as important as this and that’s be back in the community and do something for the kids,” Wade said.

“I missed out on all that growing up,” Melo added. “So I feel like I’m a kid again when it comes to something like this.

“For me. I’ve always been able to put myself in these kids shoes,” Paul said. “I wish when I was their age to have had a Carmelo Anthony, a Dwyane Wade to come out like this. It’s crazy. It’s crazy to even think about it. It’s crazy for me to even be sitting with these guys. It’s unreal and I hope these kids really realize how much people really care about them and that it’s a once in a lifetime opportunity.”