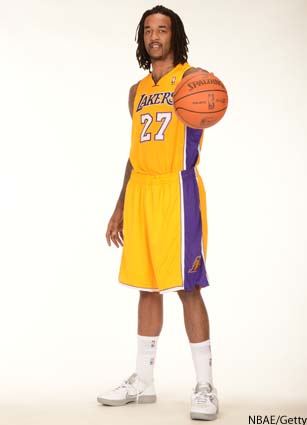 Jordan Hill: I was originally born in Newberry, SC. Then in middle school, my eighth grade year, I moved to Atlanta, GA. All my family is in South Carolina, and my father is in Atlanta. I spend most of my time going back and forth between those two.

SLAM: Where do you spend your offseasons?

JH: I go back and forth. I probably go to South Carolina first. Atlanta is about a two-and-a-half hour drive, so I just go ahead and drive. See my father, just relax up there.

SLAM: I heard you weren’t into basketball at first—you were a baseball guy.

JH: Yeah, I was into baseball a little. I was a pitcher, throwing like 89 with the fastball. I also had a curveball—sometimes I could throw it, sometimes I couldn’t. I had a pitching coach that would help me out. But my arm just kind of gave out on me—the rotator cuff didn’t stand a chance—so I started playing basketball, and it worked out for the best.

SLAM: Did you have other pitches besides the fastball?

JH: Only thing I had—I had a curveball, and I had the fastball. The curveball, it comes and goes. Sometimes I could throw the curveball, sometimes I didn’t. I had a pitching coach that would help me out.

SLAM: When did you get serious about basketball?

JH: Well, I had played backyard basketball—you know, like streetball. Started playing [in school] my freshman year, played my sophomore year, didn’t play my junior year because of my grades—that’s when I played AAU. I graduated from the Patterson School in North Carolina my 12th grade year. Coach Chris Chaney, he was at prep school at Laurinburg [Institute], but he transferred to Patterson School and I went there and played.

SLAM: Did you like basketball more than baseball after you made the switch?

JH: I’m an energetic guy. Baseball is fun, especially pitching. But it gets hard to do, to pitch a whole game. I [played a little] outfield, and sometimes it’s just boring out there. I’m a high-energy guy, and I like to run all the time, so that’s another reason why I stick to basketball.

SLAM: After you started hooping, did you have a favorite basketball player?

JH: I grew up watching Kevin Garnett, because he actually is from Mauldin, SC—that’s like 25, 30 minutes [from where I grew up]. KG, he’s a mid-range guy, he did everything.

SLAM: What about a favorite team?

JH: Definitely the Lakers, man. The Lakers had Shaq, Kobe’s still here, Devean George, those guys. They were the Champions.

SLAM: What was it like to be recruited by Lute Olson?

JH: To be scouted by one of the best coaches in the game of college ball, it was definitely a blessing. I had a lot more offers, but I took my first official visit to Arizona, and I committed while I was down there. I didn’t even ask to go to no other school—I just went down to Arizona, me and Lute Olson talked, we just had a good time and he had a plan for me.

SLAM: Was there a specific place along the way that was really important to your development?

JH: Not really. I mean, growing up, I moved around a lot. I lost my mom when I was 3 years old. My father was a truck driver, so before my mom passed away, my father was driving from South Carolina to California, all over the country. He was on the road. So when my mom passed away, he couldn’t do it anymore, because he had to take care of me, my sister and my brother. It was hard to get back on his feet. We moved around a lot. I stayed with my grandmother for a while in South Carolina; she moved to Atlanta, I went with her. It was definitely hard. I was kind of like a grown man at a young age—I was doing grown-up things at a young age. Whatever I could do, however I could do it, I’d get by to do it. If I needed help, I definitely wasn’t afraid to ask people. I managed to get by.

SLAM: Your cousin Trevor Booker is also in the NBA. Are you guys close?

JH: Yeah, real close. He stayed in a small town called Whitmire, SC, that was probably about 20 minutes from where I’m from. We were kind of raised together. We were backyard basketball buddies. His mom was my mother’s sister. It was good to have somebody like that, especially doing the same thing I’m doing. He’s with the Wizards now, so it’s definitely a blessing for both of us. We definitely still keep in contact.

SLAM: So you guys probably had some super-competitive one-on-one battles over the years.

JH: Oh yeah, all the time. Trevor, he’s a left-handed strong guy. I was like the long, finesse kind of guy—I kind of molded my game into being a physical guy now, on the block, doing the tough guy things. He’s definitely  a heck of a player. We did what we had to do. We went through a lot of obstacles, but we got through it, and now we gotta keep on going.