Josh Smith and the Hawks: We Fly High? 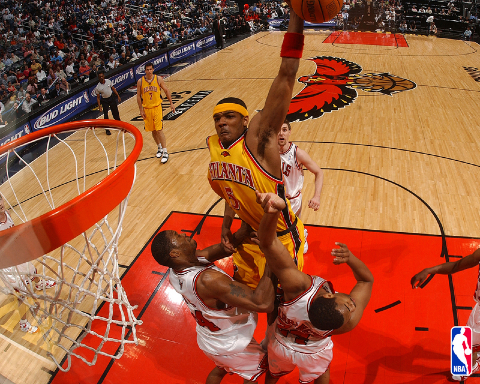 I have spared you guys my Hawks obsession for most of this season, not only because there have been more exciting teams, but also because the Hawks haven’t played well all year. The truth is, though, I’ve been watching them all season, almost every game, through excruciating pain. And always, always, always asking questions to the four padded walls that surround my TV.

• Why don’t they run Joe Johnson off picks?

• Why does Mike Woodson keep getting outfoxed during the second half of games?

• Why didn’t we draft Chris Paul?

• What’s the matter with Speedy Claxton?

• Why don’t the Hawks tweak their offense so that Josh Smith isn’t always the guy at the end of the rotation with the open jumper?

• Did we really draft Shelden “The Renter” Williams ahead of Brandon Roy and Rudy Gay?

These are just a few of the questions that have been smoldering down deep inside in my soul for the last four months. And I haven’t been able to find peace. I nearly toppled my big screen after Byron Scott bamboozled the Hawks down the stretch a few weeks ago. I’ve been exchanging daily emails and text messages with my main man Sekou Smith (and his surly alter-ego, Blog-Z), commiserating and looking for clues and answers. But there are no answers. At least easy no easy ones.

The Hawks have a lot of promising young players, but they are still at least a year away from being a consistently good team in the Eastern Conference. As they’ve continued the downward spiral they entered just after the All-Star break, I’ve been watching and secretly hoping that they’d just pack it in, just give up. They have a first round pick that they get to use as long as it’s in the top three (otherwise it goes to Phoenix in that Joe Johnson deal). The very last thing the Hawks need right now is another young player, but this draft is so deep that the pick could be a heckuva trading chip.

Then Joe Johnson went down, and I figured the Hawks were finally done. Right? Let’s lose this thing!

So what happened? The Hawks have suddenly figured it out, reeling off four straight wins (over Washington, Memphis, Minnesota and Philly) without Joe. And in the ridiculousness that is the Eastern Conference, the Hawks are suddenly 3.5 games out of the Playoffs.

Without Joe, and with everyone else finally healthy, the Hawks have been getting out and running and using all 800 swingmen on the roster. Anthony Johnson, he of the flat head, has been terrific, leading the team, knocking down shots at the shot clock buzzer. Marvin Williams has started to find his place — check his numbers the last two months — and Josh Childress is always solid, always making the correct pass or rotation.

The greatest thing about this run is that Josh Smith has quietly blossomed into nothing short of a coldblooded killer. He’s been so raw that he makes me want to use profanity to describe him. Josh is averaging 15 and 8 on the season, and he’s fourth in the entire league in blocks per game. (Actually, he’s had at least one blocked shot in his last 27 consecutive games.)

Remember how Andrei Kirilenko used to play before his knee injury? That’s how Josh is playing now, but with even more athleticism. Last night he missed an alley-oop because he almost hit his face on the rim. Seriously. And I don’t know if there’s anyone in the League with a faster second-leap than Josh shows each night.

Josh has been balling completely out of his mind the last few weeks, but particularly the last four games without Joe. Just look at the 32 and 6 he put on KG (while shooting 12 of 15 from the floor). And he was basically taking on all comers against Philly last night, finishing with a jaw-dropping 26 and 17 (plus 5 assists and 3 blocks). All this without anything even smelling like a consistent jump shot.

And he just turned 21 years old!

Inconsistency has always been a big part of the J-Smoove package, but he finally seems to have settled down and found his groove. Hey adidas, can we make it It Takes Six next year? (And is there any coincidence that Josh is eligible for a big raise this summer? Nah.)

I fully realize I’m probably jinxing the Hawks right now. We play at Boston tonight, which should be a great little test for this team, and then at Indiana. Then home for another stretch. The real challenge will be integrating Joe Johnson when he gets healthy. He’s so good that the rest of the team usually ends up standing around and watching him, which completely screws up the Hawks flow.

One thing that a lot of people seem to forget is that NBA players and NBA teams have to learn how to win games together. You can stay close for a few quarters, but the very best NBA teams turn into executioners in the fourth quarter. Learning this takes time, and the Hawks just might have started to figure this out. They aren’t executioners, not yet, but they at least look like they have an idea of how it’s supposed to work. Which, believe it or not, can be considered progress with this team.

The odds are against the Hawks making the playoffs, but there’s still 20 games left.

And as long as I’m watching, what the heck, I’ll believe.

What have I got to lose?