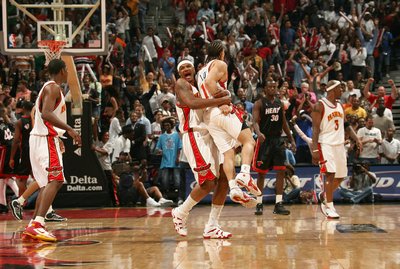 There was a report in the Detroit News on Monday claiming that J-Smoove got so mad at Ty Lue for not getting him the rock against the Pistons, that he began yelling at the point guard and had to be held back by the coaches.

Josh Smith and Tyronn Lue have both categorically denied the report. From the AJC:

“It’s a lie,” Smith said of the report that had him yelling at Lue to pass him the ball and then yelling at Woodson to “get Lue out of the game” and later having to be “restrained by coaches and teammates.”

“We never got into it,” Lue said. “So he had to be restrained by other players and coaches … man, are you serious? None of that happened.”

The erroneous report came from Chris McCosky, enemy to bloggers the world over, who also got Josh Smith’s contract situation wrong in the piece.

This is a little too “inside baseball” for most to care about, but you must understand that there’s a certain amount of schadenfreude being felt in the blogosphere at McCosky’s expense right about now.