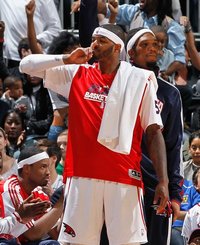 The NBA Playoffs haven’t been this highly anticipated in many, many years — maybe ever, in fact — but there’s one series that almost no one is excited to watch: Orlando Magic vs Atlanta Hawks. Sorry, Lang.

But, hey, Josh Smith is mad at Jameer Nelson! Sort of! Get pumped, everyone!

Smith apparently took exception to Nelson being a little too confident about Orlando’s chances against Atlanta, and cites the Hawks’ regular season success versus the Magic as reason not to overlook his squad.

“A lot of their players are already claiming they are already going to make the second round, so that gives us a little added motivation, too,” Smith said. “If that doesn’t get you geared up, I don’t know what does.” After the Bulls defeated Orlando 102-99 on Sunday, Chicago guard Derrick Rose was being interviewed live on ABC when Nelson sought him out. He leaned close to Rose and appeared to say: “Catch you in the second round.”

The winner of the Hawks-Magic series will face the Chicago-Indiana winner. The Magic swept the Hawks by an NBA-record margin of 101 points last season, so it’s not as if they don’t have reason for confidence. The Hawks counter that they won three of four regular-season meetings, including the past three. Smith said he thinks that should temper Nelson’s confidence. “It was surprising, knowing that we are a better team,” Smith said. “They understand that they can’t just run us off [the court]. It’s going to be a tough series, and they know it.”

Hawks center Al Horford said Nelson’s comments have been a subject of conversation in the locker room, but guard Joe Johnson shrugged them off. “That’s how he feels,” Johnson said. “They are confident. You are supposed to be confident. It doesn’t bother me.”

So, yes, there you have it. Orlando vs Atlanta. There’s a beef there, but it’s one-sided, and not all that interesting. Oh, well.