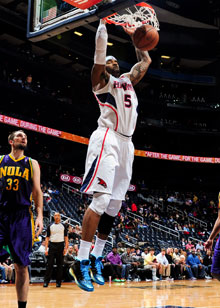 What started as rumors earlier this season picked up steam after Josh Smith’s management met with Hawks management to discuss the future of the ninth year forward.

Smith, who began his career with the Hawks as a 19-year-old rookie in 2004, helped the franchise evolve from a 13-win season into a perennial Playoff team.

Since his rookie year in ‘04-05, only Tim Duncan has matched Smith’s career averages of 15+ points, 8+ rebounds, 3+ assists and 2+ blocks. This season, Smith is the only player who currently holds those averages.

While many tend to pick apart his game, Smith has proven himself as a defensive anchor with a tireless motor. He has spent his career playing big on many undersized Hawks rosters. He bangs with centers, guards perimeter players, and cleans up mistakes around the basket.

Not only can he guard every position, but Smith can play most of them. In a 2011 interview, head coach Larry Drew spoke about Smith’s versatility in the motion offense, saying, “I would say him more than any other player on our team—not only did he learn his position, but he learned everybody else’s position. I can put him anywhere on the floor…and he has an understanding about what I’m looking for. And that’s very special to have a player like that.”

At age 27, in presumably the prime of his career, the zero-time All-Star with Hall of Fame level talent is at a crossroad. On the swirling trade rumors, Smith told SLAMonline he will “continue to play my game, not worry about any kind of reports that are being documented, and that’s where I stand at.”

“All I can do is worry about playing the way I’m capable of playing in order to better this team and to better myself. I can’t worry about anything else,” he said.

Anyone who watches Smith play knows the impact he is capable of making. The only question remaining is what team it will be for.