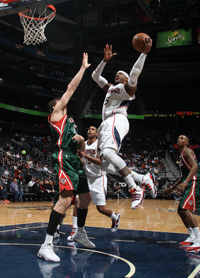 In Atlanta’s recent fourth quarter collapse at Oakland, Josh Smith threw up a potential game-winning three from the right wing with only 5 seconds remaining. It was just his sixth try from that distance all year. And after that miss, which capped an embarrassing road loss against the Warriors, Smith still has yet to make a three pointer this whole season.

Despite that 0-fer mark from the outside, Smith’s developing jump shot is being celebrated this season. His teammates, coaches and others around the League are pleasantly surprised by what they’ve seen. The less he takes, the more his critics want to kiss him.

It’s funny how things work sometimes. Smooth went from being a threat to drop in a three every now and then to someone who won’t even look at the iron from that line. Yet, it’s the best thing that’s happened to his game and to the Hawks.

Smith hit at least 25 three-pointers in his four previous years, including a career-high 38 in the ‘06-07 season.

During that season, Atlanta won all of 30 games, finishing last in the Southeast Division. Now, they are looking for well over 50 wins and are reaching for a possible trip to the Eastern Conference Finals, a place the organization hasn’t seen since 1970 when they were still in the Western Division.

Joe Johnson is an All-Star, having made the showcase four consecutive seasons. Jamal Crawford is challenging for the Sixth Man of the Year award and Al Horford is the defensive anchor and a first-time All-Star himself. Yet, the player most in tune with the team’s success is Josh Smith. He provides the big man athleticism that has teams scrambling back on defense. He is the guy who creates turnovers and fast break opportunities with his gambling and big-play ability at the defensive end. If Atlanta is going to challenge for a Finals appearance, Smith must continue to stick to the script.

Because of his teammate’s success, the 6-9 forward hasn’t garnered much attention outside of his three-pointer resistance. But, Atlanta’s win over Minnesota on Wednesday night showcased just how far he has come: a season-high 27 points on 13 shots, 10 rebounds, 5 assists and 2 blocks. Even though Horford, Crawford and Marvin Williams combined to shoot 5-25, the Hawks still pushed their record to 36-20 with the 98-92 win.

This year, Smith is putting up career-best numbers in shooting (51 percent), rebounding (8.6), assists (4.0) and steals (1.6). He is also turning it over at his lowest rate in four years.

Hawks coach Mike Woodson, after years of frustration with the high school prodigy, is now pointing out signs of maturity in his forward and says he is more proud of Smith than any player he’s ever had.

In high school, Smith was pampered in the same way many talented kids are. Because he was so far advanced athletically, Smith developed a lazy approach that attached a stigma to him. He could’ve been a top 5 pick in 2004. Instead, he lasted until 17 amidst concerns his immaturity would stunt his growth.

And it did for the first five years of his professional career. Touted as a small forward for most of his time at Oak Hill, Smith spent his early years in the League showcasing an inefficient all-around game that did little to lead to wins. It was apparent he was most effective as an undersized power forward, using his athleticism to rotate around the basket for blocks and then push the pace at the other end.

So far this season, Smith is content to play his role. A sign of maturity is composure, and Smith’ s mental approach has finally caught up to his body after years of chasing. That growth culminated in a game earlier this month against Oklahoma City when he became the youngest player in NBA history to block 1,000 shots. With his level of talent, role-playing could eventually lead to All-Star status.

Rashard Lewis. Antawn Jamison. Kevin Garnett. Smith will have to handle himself like an All-Star during this postseason. Atlanta will no longer be happy to win its home games, like it was two years ago against the Celtics in a first round loss. Also, there will be no celebrating a second round visit — that was last year where Cleveland promptly annihilated them.

Back in the day, Smith was always disturbing. He argued with Woodson from seemingly the moment he was introduced as Atlanta’s 2004 first round pick. He miffed his fans with a penchant to loft up ugly 22-footers. And even some of his top plays—dunks over his future teammate Zaza Pachulia and another on Alonzo Mourning’s dome—were just plain ugly.

He is still a nightly visitor to the rim, but he may have finally turned the corner on his career. From lottery-bound to playoff victor. From coach-killer to future All-Star? Jay Bilas isn’t calling him out anymore.