Josh Smith’s Agent Says There are ‘Frustrations in Atlanta’ 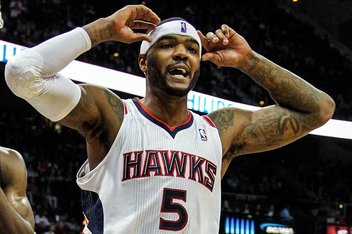 The fact that Josh Smith didn’t sign a contract extension with the Hawks all but guaranteed that this would be an awkward season in Atlanta. And despite both sides saying that things would work themselves out, sure enough, tensions are rising.

The Hawks suspended Smith after he reportedly blew up at practice. Josh’s agent, Wallace Prather, met with GM Danny Ferry and though he stopped short of demanding a trade for his client, it’s clear that Josh Smith is one unhappy camper.

“As far as moving forward and whatever changes will be made, that’s more so management’s job to field those calls and make the decisions they feel like are best to move forward,” Smith’s agent said. While Prather made it clear that Smith is concerned about how the once-hot Hawks have rolled over in losing six of their last seven games and seven out of nine, neither he nor his client has asked for a trade. […] “I want to be clear that I’m not pushing a trade,” Prather said. “This is not a trade request or anything, but there are frustrations in Atlanta.”

Multiple rival executives confirmed that the Hawks have participated in trade conversations with several teams regarding Smith, a 27-year-old game-changing defender when engaged. […] Among the teams that would appeal to Smith are Dallas, Houston and Memphis, a league source said.

Regarding the possibility of an in -season trade, Prather let this out: “I do know there are teams interested.” Josh Smith, 27, will be an unrestricted free agent next summer.

Interesting times (and decisions) ahead in the A.