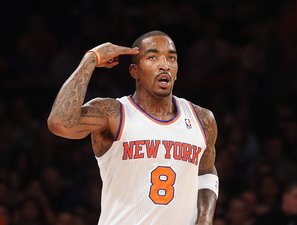 The New York Knicks’ 40-year NBA championship drought will soon come to an end, according to JR Smith.

While adding fuel to the Knicks/Nets rivalry by dissing Paul Pierce, Smith guaranteed that New York will be hoisting the Larry O’Brien trophy next June.

During a question-and-answer session with kid golfers at Chelsea Piers, Smith was asked how sure he was of the Knicks ending their title drought this season. “I’m 100 percent sure,” the swingman said. Smith was then asked why he joined the Knicks over the Nets when he came back from China in February 2012. “The Nets weren’t good,” Smith said. “Now they’re still not good.”

When asked why he is so confident, Smith said, “I feel comfortable. People ruled us out last year early, too. We added some great pieces. Unfortunately, we got rid of some good pieces. But we added Andrea [Bargnani], Beno [Udrih], Metta [World Peace]. We have to consistently play like we did the first 20 games last year the whole season. We can’t have a middle-of-season lapse. We have to consistently play the same way.”

While hopeful to play when the season starts, the 28-year old Smith isn’t sure he’ll be fully recovered from offseason knee surgery.

In other very important JR Smith news: the guard clarifies that he’s not the owner of a tank (it belongs to a friend.) Smith drives a Bentley.