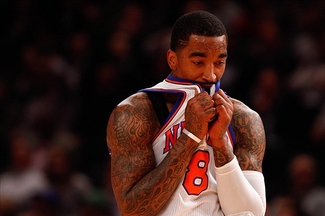 The Knicks say that the soon-to-be 28-year-old’s injuries were chronic and gradually worsened, and that he’ll need about 12-16 weeks to recover.

That timetable seems certain to knock him out of action when they begin training camp in September. The regular-season schedule hasn’t been announced yet, but historically the NBA opener is on or around Nov. 1. […] J.R.’s brother Chris, who is a member of the Knicks’ summer-league team, said last week he expected J.R. to travel to Las Vegas to watch him play. But that never happened. Instead, he was at the Hospital for Special Surgery undergoing surgery by Dr. Answorth Allen.

The Knicks knew about the issue when the season ended and knew Smith would need surgery. Earl Smith, J.R.’s father, claimed the surgery was timed for mid-July during summer league and it had no bearing on his son hiding his injury during free agency.

The team reportedly didn’t hesitate to re-sign JR Smith this summer despite his injuries, since they considered his deal below market value.

Smith won the Sixth Man of the Year award last season, but struggled mightily in the Playoffs against the Indiana Pacers as his left knee injuries worsened.