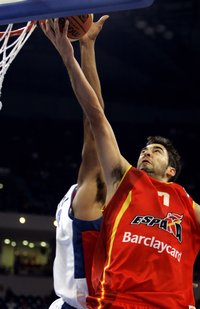 Can you blame the guy?

Hmm, let’s see. Live in Memphis, make chump change (compared to other NBA players, anyway), play for a dwindling franchise, a bumbling owner who throws everyone under the bus after the organization trades away their best player in exchange for Kwame Freakin’ Brown … or, go make great money and live in beautiful Spain? Gee, really tough choice you got there, JCN.

Spanish guard Juan Carlos Navarro’s chances of returning for a second season in Memphis were blown to pieces Wednesday afternoon when he decided to re-sign with FC Barcelona.

Navarro, who earned $538,000 with the Grizzlies last season, was swayed by a deal that will pay him between $20 million and $24 million over the next four years.

As Navaro sped away from Memphis, Wu-Tang’s C.R.E.A.M. could be heard blasting from his car’s speakers, it was not necessarily reported.