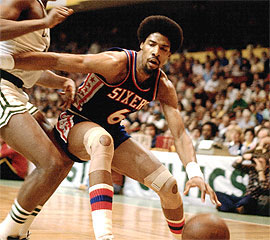 Out of sight, out of mind, the adage goes. Julius “Dr. J” Erving has had a low-key profile since his retirement in 1987. Until recently named a special adviser to the Philadelphia 76ers, Erving has only been a fixture on the judging panel at the Slam Dunk contest during All-Star Weekend (with good reason). But otherwise the next generation of NBA fans haven’t had a chance to see him like his peers, Larry Bird and Magic Johnson, who took on front office and broadcast roles after their playing days. So the feats, contributions and impact Erving brought to the game become more lore and urban legend with each passing season.

Which is why it’s opportune that NBA TV Originals tells Erving’s story in the The Doctor on NBA TV, Monday, June 10. The documentary offers a complete look into the life of the 11-time NBA All-Star, from his childhood in Long Island, New York, up until his very last game with the Philadelphia 76ers. Yet, the content in between both bookends makes for an entertaining and informative history lesson, chronicling his high school and collegiate careers and his entry and ascendance in the American Basketball Association. Surprisingly there is no shortage of archival footage or images, including his trips to the famed Rucker Park in New York City in the 1970s.

The story of the ABA and its eventual merger with the NBA is key to the narrative and Dr. J’s transition to the Philadelphia 76ers, bringing his high-flying flair and slam dunks to the NBA. Something NBA fans had never seen before—but was a signifier of things to come. Erving’s class, professionalism and cool made him a leader on the endorsement front as one of the first African-American pitchmen, yet Erving’s impact clearly went beyond the basketball court. The Doctor does the same, examining the personal tragedies he’s endured, including the losses of his father and brother, both at a young age and the tragic death of his 19-year-old son.

There is no shortage of interviews with family, friends, journalists and a who’s who of NBA players, yet Erving still remains the key storyteller. Whether it’s taking the viewer on a tour of his childhood home, or Nassau Veterans Memorial Coliseum where he started his professional career with the New York Nets, his voice is very much present. Watching the The Doctor, no question is left unanswered when it comes to the legend of Dr. J; however, when utilizing the principal of a film to tell a story, sometimes the full scope isn’t always shared.

In a recent conference call with media, Erving stated the filmmakers had “carte blanche” to ask whatever they wanted, yet no mentions of Erving’s infidelities are discussed in the film. Is this integral to the story? Yes, only as The Doctor documents the complete on-court career of Dr. J as much as it delves into the off-court life of the man Julius Erving. While his performance on the court was phenomenal, it wasn’t perfect and it would be foolish to hold the man to a similar standard. Yet overlooking his transgressions doesn’t make the story better, just incomplete. Yet it’s a minor misgiving, as The Doctor is a great portrait of a career, life and legacy that stands as a reminder to keep the good doctor’s work, front of mind.