Justin Williams Is in Big Trouble 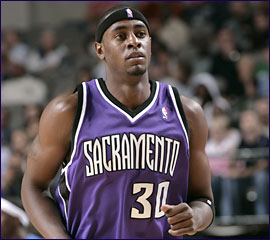 It’s been an awful summer for the NBA. And that’s putting it as nicely as I possibly can.

It started with a Finals that hardly anyone watched, moved into Don-a-gy Gate, Eddie Griffin died horrifically, Isiah and MSG then had the spotlight for a while (for all the wrong reasons, of course), and yesterday the news broke that Jason Kidd threw a no-look pass at a young woman’s unmentionables.

Time to add one more unfortunate story to the pile: Justin Williams, a second-year backup center for the Sacramento Kings, is being investigated by local police because a woman has accused him of sexual assault.

From the Sacramento Bee (remember, you can always use bugmenot.com if you can’t access the article):

The mother of two told police last week that she met Williams and another woman at a party and went with the couple to Williams’ Natomas home, according to the source. The woman said she did not drink before arriving at Williams’ home and felt woozy after having a drink at the house, the source said.

According to the source, who asked to not be identified because the investigation is ongoing, Williams and the other woman tried to have sex with the alleged victim in Williams’ bedroom.

Guilty or not, this is terrible news for Williams, the Kings organization, and a League that can ill afford one more PR nightmare.

At this point, one could easily make the argument that 2007 is one of the worst years in the NBA’s sixty-one year history.