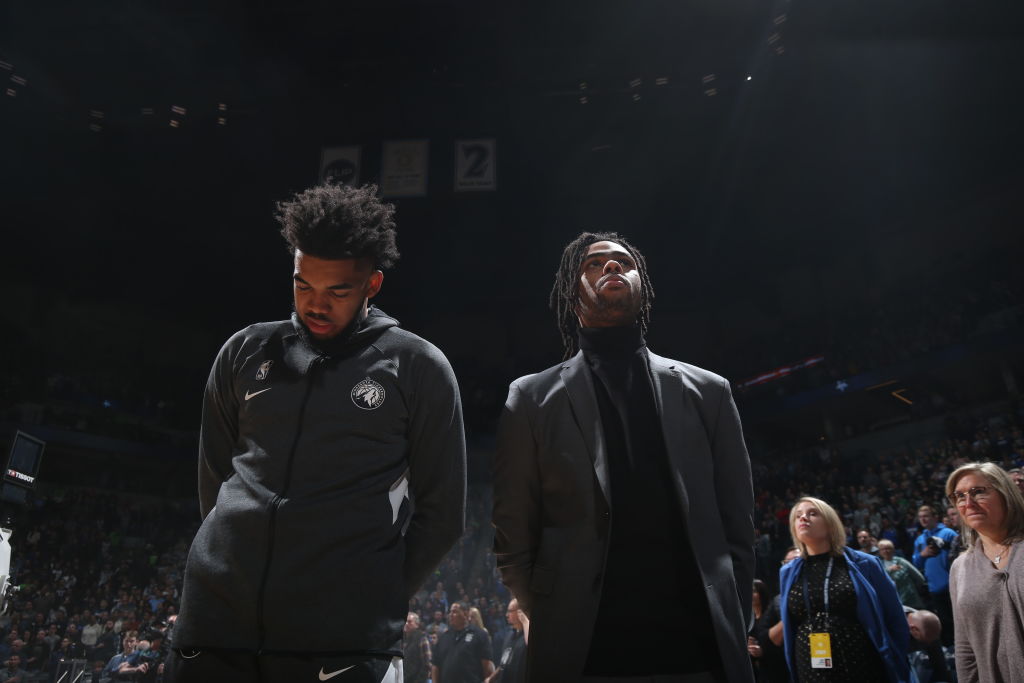 Sometimes history has a way of repeating itself in the NBA. Over two decades ago, the Minnesota Timberwolves found their first sustained success with Flip Saunders, a talented big man and a high-scoring point guard.

Twenty-three years later, Minnesota is hoping that the trio of a Saunders on the sidelines, a multi-faceted big man and a scoring guard can lead them back to NBA relevance.

When the Timberwolves drafted Kevin Garnett straight out of high school in 1995, there were questions if then-general manager Kevin McHale had lost his mind. Garnett detractors saw him as too skinny and immature to have an impact in the NBA. The story back then was, this kid might take years to develop.

It took about half a season for Garnett to start changing minds.

Garnett would go on to play over 900 regular season games over 12 seasons in his initial stint in Minnesota. (Garnett would retire as a Timberwolf in 2015-16). He established himself as the best player in franchise history.

Eventually, Garnett’s No. 21 jersey will hang in the rafters in Minnesota alongside those of Malik Sealy, who tragically died following the 1999-2000 season in a traffic accident, and Flip Saunders, who passed away in 2015 after battling Hodgkin’s Lymphoma.

Saunders took over as the Wolves’ head coach partway through Garnett’s rookie season. It was Saunders who put Garnett in the starting lineup, a position Garnett would never relinquish for his next 11 years in Minnesota.

That first year, the Wolves won 26 games. They were hardly setting the NBA world on fire, but things were starting to heat up. That summer, the accelerant was added to cause things to burst into flames.

Marbury came to the Wolves with the reputation of having a big game and an even bigger personality. After just one year at Georgia Tech, the New York City product declared himself ready for the NBA. The brash point guard was seen as the perfect complement to Garnett. After missing out on the playoffs in the first seven seasons of their existence, Minnesota was all-in behind their two young studs.

The results were immediately felt on the court. Marbury didn’t actually score in his first game, but Garnett had 17 points, nine rebounds, six assists, four blocks and three steals. The Wolves upset perennial playoff team San Antonio that opening night on their way to a 40-42 record and the franchise’s first playoff appearance.

For a team that hadn’t sniffed a .500 record at any point since entering the NBA as an expansion team in 1989, it was a major step forward. Getting swept by the Houston Rockets in the first round didn’t even matter. The next season, things were even better.

In 1997-98, the Timberwolves went 45-37, posting the club’s first winning season. Tom Gugliotta actually led that Minnesota in scoring before suffering a season-ending ankle injury, but it was the team’s two 21-year-olds who led the team on the floor. In his third season, Garnett had become a full-blown menace. He averaged 18.5 points, 9.6 rebounds, 4.2 assists, 1.8 blocks and 1.7 steals and made his second All-Star appearance.

Marbury was the ideal running mate for Garnett. He ran the offense with 8.6 assists per game, while scoring 17.7 point per night. Behind the blossoming duo, Minnesota eventually pushed the Seattle SuperSonics to a decisive Game 5 in the playoffs’ first round before bowing out. The future was never brighter for the Timberwolves.

The following summer, the NBA owners would lock the players out. The previous year, Garnett and the Wolves had agreed to a six-year, $126M contract extension. That was the largest such deal in NBA history at the time. Many speculated that massive contract directly led to the lockout. For Minnesota, it would have further-reaching impacts.

By the time the abbreviated 1999 season started in early-February, Marbury was unhappy in Minnesota and requested a trade. Pending who you believe, Marbury wanted to be closer to his family in New York or wanted to play in a bigger market. Regardless, Marbury was dealt to the New Jersey Nets in mid-March, ending he and Garnett’s partnership after just two-plus seasons.

While Minnesota would retain their status as a playoff team for six more seasons, and Garnett and Marbury would both find individual success, the Wolves never became the title contender it looked like they would with the duo in place. Years later, Garnett was dealt to the Boston Celtics. As things in the NBA have a way of coming back around, Garnett and Marbury would team up in Boston for Marbury’s final NBA season in 2008-09.

Garnett would go on to play for eight more seasons, eventually reuniting with Saunders in Minnesota for the 2014-15 season. When Saunders fell ill and eventually passed, Garnett was devastated at the passing of his long-time friend and mentor.

Fast forward over 20 years, and the Wolves are again making a run at pairing a star duo of a big man and a guard with Karl-Anthony Towns and D’Angelo Russell. Once again, it’s a Saunders leading the team on the sidelines, as Flip’s son Ryan has taken over as Minnesota’s head coach.

Like it was with Garnett, the big man has a head start on the guard as the team’s franchise player. Towns is in year-one of a five-year, $158 million contract extension. So, much for Garnett’s mega-deal crippling the NBA financially for all-time!

Russell joined the Wolves after a four-year journey that saw him go from the Lakers to the Nets to the Warriors. He was signed and traded to Golden State on a four-year, $117 million deal this summer as a free agent.

That contract was always seen as a bridge deal for the Warriors, who flipped Russell to Minnesota for Andrew Wiggins and a first-round pick at the trade deadline. And it helped Russell eventually get to the place he always wanted to be.

Unlike their predecessors, Towns and Russell have long-wanted to play together. The two have been close friends since before entering the league as the first and second picks of the 2015 NBA Draft. Towns and Russell even talked about teaming up this summer, when Russell was a free agent, but no deal could be struck at the time.

Towns and Russell have only played together for one game so far, as Towns suffered a fractured left wrist. That one game was encouraging as Towns and Russell combined for 45 points against the Toronto Raptors. The hope is the pair will give Minnesota a versatile offensive attack that can score both inside and outside.

There won’t be any sort of immediate playoff appearance for Minnesota’s new star duo, as the Wolves are already way behind in the playoff race for this season.

Going forward, the Wolves have faith that Ryan Saunders, Towns and Russell can form a trio to lead them back to the postseason just like Flip Saunders, Garnett and Marbury did once upon a time.

This time around, the Timberwolves hope the duo’s stay in Minnesota lasts for more than two-plus seasons.