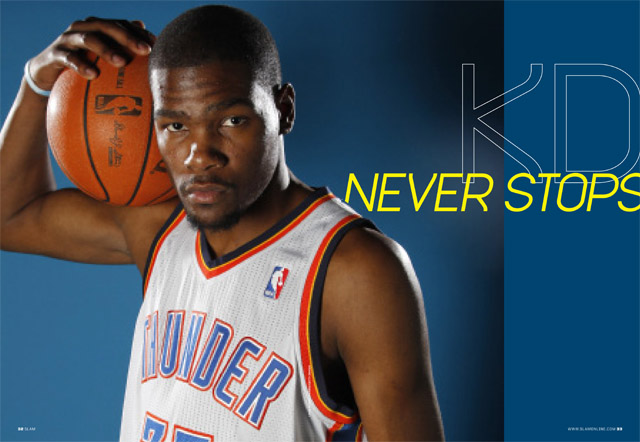 This is the cover story in SLAM 155 (March, ’12), which is no longer on newsstands. Purchase back issues of SLAM here.

Kevin Durant strolls into the interview room at the Oklahoma City Thunder’s mid-December media day and it’s immediately evident: Something is different. It’s not an explicit, over-pronounced different, but it’s not a blink-and-you’ll-miss-it different either. There’s a clear, visible difference, and you only need to be around Durant for two or three minutes before you can sense it.

He’s still the same KD—the same good-natured DC kid with arms that hang endlessly from each shoulder, same skinny 6-9 frame and same jump shot that’s butter-smooth out to 30 feet. He’s still the leader of the Oklahoma City Thunder, still the best player among a collection of still-young talent that’s still building toward its goal of winning an NBA Championship.

And yet, something is different. It’s himself, or rather, his ability to be himself in such a public setting, surrounded by newspaper writers and TV cameras and bright lights and digital tape recorders. He sits with poise, speaks with clarity, maintains eye contact, keeps his head up. He pokes fun at plugged-in reporters who broke coveted information during the lockout—“Everybody got sources!”—jokes about his teammate/friend/supposed-to-be rival Russell Westbrook—“He’s pretty good”—and calls himself fat—“I looked in the mirror before training camp and, you know, I actually looked fat!”

Durant’s game has been progressing steadily, but as an off-the-court personality, this is somewhat new, if expected, headway. It’s the next logical rung on the ladder toward superstardom, the one on which the reserved, soft-spoken athlete adapts to his status and surroundings and becomes noticeably at ease under the glow of the public eye, or, at the least, the glow of the half-dozen or so cameras beaming white light into his eyes as he’s questioned by an anxious media horde 12 days before the ’11-12 season tips off.

“I feel like a rookie, just getting drafted!” he says, leaning back in his seat. “I’m excited that the fans get to enjoy the game again, and that we get to play the game we love. I’m looking forward to it.”

Of course he is, but that’s not to say he was just sitting idly by during that awkwardly extended offseason. Assuming you own a computer, you know this. Obviously you watched him drop 66 points at Rucker Park—the most popular video of that performance has been viewed over 3 million times—and odds are you caught a decent glimpse of the rest: the trips to China and the Philippines, the series of charity games, the workouts with LeBron James, the flag football tilts with both strangers and friends (including Bron), the starring role in a Space Jam-like feature film, the Nike commercials, the release of a new signature sneaker and who knows what else.

The busy summer came on the heels of an anticlimactic but productive ’10-11 season. The Thunder fell to the Dallas Mavericks in the Conference Finals, though not before rolling through a sneaky-good Denver Nuggets squad and holding off a talented Memphis Grizzlies team powered by gallons of unfiltered momentum. It was the deepest Playoff run in the history of the OKC franchise, and more importantly, a valuable experience for a group of guys in the dawn of their 20s. (Nazr Mohammad and Nick Collison are the only players on the roster who crack 30, and Kendrick Perkins, at 27, is in many ways the squad’s elder statesman.)

There were growing pains, too, unlike any the Thunder had fought through in the past. As Westbrook’s talent evolved, so did his desire to take over big games, and the result was some minor friction between the two co-stars during a few crucial moments in the Memphis series. Westbrook was benched shortly thereafter as a likely consequence, and then everyone in the Thunder locker room moved right along. No big deal. But perhaps because this OKC team offers little in the way of off-the-court narrative—“We just want to play” was a bit of a media day theme this year, but also a straight-up fact—the national media latched on to the Durant-Westbrook power struggle as one that could lead to the downfall of the current roster.

“I just know that me and Kevin are very close,” Westbrook says, almost confused as to why he’s still bothering with this. “We talk every day. I don’t know what happened last year or what led to everybody saying that, but I’m on to the new year.”

“People gotta understand that guys are not gonna agree on every single thing that goes on in the long season,” KD says, acknowledging the road bump while downplaying its significance. “Guys will have heated arguments. But at the same time we understand each other; we know that we just want the best for each other. I got his back 100 percent and he’s got my back 100 percent, and people dubbed us the two best players on the team, so of course you’re gonna see some tension amongst a group of media guys or people from the outside looking in.

“At the end of the day, we all wanna win. He wants to win, I want to win and we support each other. I’m excited he’s on our team because he’s a freak of nature.”

He may be right about the lack of issues, yet there’s certainly plenty to talk about—whether or not two high-octane, trigger-happy scorers can co-exist on the court is worth a discussion—but any waves of tension between the pair appear to have been artificially manufactured. More importantly, both Durant and Westbrook have prepared accordingly to come out swinging during the shortened 66-game season. In KD’s case, he readied himself by adding some bulk (no, not fat) to his rail-thin torso with the hopes of developing a solid post-up game.

“I think that me being more patient down there and being stronger and getting the ball has improved a lot,” Durant says. “I gotta keep working. I gotta keep getting stronger. And my teammates challenge me every day in practice, so I know with them on my back every single day I can get better.”

“He definitely came back stronger,” Brooks confirms. “He’s added a little bit of muscle to his frame. His post up game, we are gonna continue to build on that. We’ve made steps in the past three or four games with that. I think this year you’ll see another step.”

Twenty-four hours later, Kevin Durant is navigating the Thunder’s morning practice like the coolest kid in the schoolyard during a particularly exciting recess. Simply put: He’s comfortable as hell. One minute he’s beating his buddy, budding sixth man James Harden, in a free-throw contest and letting off a “Woo!” that reverberates right through the gym’s empty space, the next he’s chopping it up one-on-one with Coach Brooks at halfcourt, the next he’s working on post moves with former NBA player and coach Kurt Rambis, who flew down to OKC to put some voluntary practice time in with the team. Within the hour, Durant, Harden and reserve guard Eric Maynor will make afternoon plans on Twitter (“Madden 12 all day?????”) and the next night the three plus Westbrook will watch an exhibition game between Mid-America Christian University and East Central University in southwest Oklahoma City.

The Thunder’s brand-new practice facility isn’t exactly your standard cubicle-clad office, but it’s still a workplace environment, and KD goes to work each day with some of his closest friends.

“We’re like brothers,” Maynor says. “I think it plays a part on the court, when you’ve got guys that hang with each other off the court. The way you read each other, chemistry, having each other’s back, knowing you’re so close—you don’t really see that too much in the League with some teams.”

That you don’t, especially in today’s NBA, where superstars find new homes each summer and the world awaits every free agent-to-be’s Decision for months on end. Double that advantage in the West, where the Mavs didn’t fully re-stock their Championship roster, the Lakers appear desperately in need of fresh energy and the Spurs may have aged past their expiration date. The Clips are loaded like never before but will need some time to properly jell, while the Grizzlies may be on the cusp but don’t appear to have the firepower to make it out of the conference just yet.

Which leaves the Thunder in the driver’s seat, in perfect position to compete for the Larry O’Brien Trophy. They’ll need a strong leader to reach that apex, and fortunately for them the consensus around the locker room is that a pretty good one is firmly in place.

“I’d never tell KD this,” Kendrick Perkins, who was acquired around the trade deadline last season, says during his media day session, “but I think he kind of set the bar high for me, personally. Practice starts at 10, he’s there at 7:45 every morning, and I’m sitting up here looking at him like, Dude, what are you doing? Seriously, I’m used to getting my shots up after practice—he’s before and after practice. I’m like, Man, you setting the bar pretty high for a guy who’s got kids. I need every extra minute of my sleep.

“He’s a guy that leads by example,” Perk continues. “When I first got here, I never saw a superstar work as hard, and that’s the honest truth. Just watching him before practice, then he goes through practice hard, then he’s shooting again after practice, I’m like, Man, when do this dude ever get tired? He really leads by example by not even saying a word.”

Ask Maynor about the improvements KD’s made, and the answer comes quick: “Better leader. Leading in the right way, tough—not fussing at nobody, [but] talking to people. Listening. I think you can be a leader by listening. He realized now that he’s the face of this organization, really. We’re gonna go as far as he takes us.”

We’ll learn how far that’ll be next summer, but we know right now what’s expected, and that’s nothing short of a ring—with a possible MVP trophy on the side for good measure. Any interest in reaching the next level, Kev?

“Some lofty expectations, man.” He lifts his head, calm and confident as he selects his words. “I just try to go to work every day, try to be a professional, try to be the best player I can be [and] work as hard as I can. Gotta live with the results.”