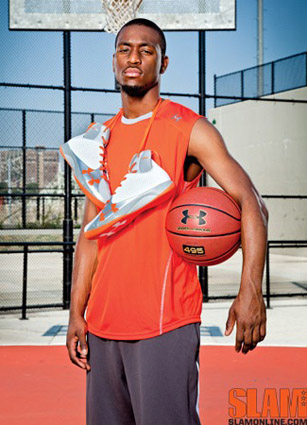 Rookie point guards have it rough, so it’s not surprising that Kemba Walker struggled at times during his first year in the League. Consider the fact that—in a lockout-shortened season—he played on a team that finished the season with the worst winning percentage in the history of the NBA, and it’s safe to say his inaugural campaign got off to a rocky start.

And yet even in the midst of chaos in Charlotte, Kemba played in all 66 games, started 25 and averaged 12.1 ppg, 4.4 apg and 3.5 rpg, plus almost one steal each game—impressive numbers for the New York native criticized by some for lack of size or pure point guard skills. In a late January loss to the Wizards, Walker messed around and got his first career triple-double.

In honor of his 22nd birthday, we salute King Kemba with a gallery of portraits, video highlights and reflections. Having survived his rookie season, our KICKS 14 cover boy will now get back to work for year two. But today, we hope he’s relaxing. Happy birthday, Kemba!