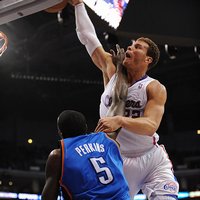 From now until the day he retires, and quite possibly well beyond that, Kendrick Perkins will be known as the guy that Blake Griffin annihilated with a monster dunk.

It doesn’t matter what else he does with the rest of his career, the mark Griffin put on him last night is irremovable.

The Dwyane Wade posterization, the infamous scowl, his Boston Celtics days … all of it sort of fades into the background for now. Kendrick Perkins is the guy that got got by Blake Griffin.

To his credit, the OKC Thunder center said that last night’s monster dunk is just one of those things that happen from time to time, and accepted that shot-blockers must learn to live with these occasional humiliations.

There was some debate among journalists while waiting for the Thunder locker room to open. Did Griffin initiate contact with his off hand? Should it have been an offensive foul? “It was a clean dunk,” said Perkins. Kendrick didn’t get a great look at the play as it unfolded. “I didn’t know what happened,” said Perkins. “I just knew I was trying to get to the rotation. Our defensive coverage had broke down and that’s what it was.”