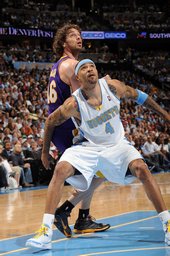 Over the past two seasons, Los Angeles and Denver have met in the postseason. Both times, the Nuggets were sent packing. According to Kenyon Martin, Denver’s emotional forward, the results of those postseason battles are not indicative of which squad is superior.

Kenyon is convinced that his Nuggets are the better team, and went on the radio to declare his stance.

I think guys know that we were right there and everybody in that locker room and in the organization feels we were a better team than the Lakers.

Everybody feels we were a better team than the Lakers and no one can tell me anything different. No one.”

Kenyon also believes in the existence of the Easter Bunny and Santa Claus, and no one can tell him any different. No one.

Of course, this isn’t the first time Kenyon has mouthed off when asked discussing the Lakers, and it certainly won’t be the last. Facts be damned.