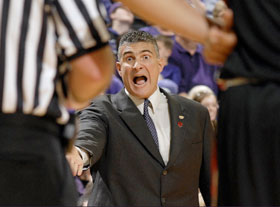 -So, no movement yet for Carmelo Anthony, but a much different Nugget roster should be at his disposal tonight, as they look to avenge that tragic loss last week to San Antonio. With the return of Chauncey Billups, Birdman Andersen and Kenyon Martin, Head Coach George Karl will have a full roster for the first (and maybe ONLY time with an impending trade) all year long. Make no mistake, this team’s defensive intensity and overall attitude will be strengthened by the ‘10-11 debut of KMart and, against an opponent like the Spurs, a little experience and grit are in high demand.

-Last night in college basketball featured one of the games I had circled early in the season, as UNLV traveled to Kansas City to face the Wildcats of Kansas State. Unfortunately for the purple faithful, stars Jacob Pullen and Curtis Kelly were not at Head Coach Frank Martin’s disposal.

The tandem was charged with receiving impermissible benefits from a local department store and caused Pullen to be shut-down for three games while Kelly’s suspension is still indefinite. While the player subtraction will surely hinder the Cats in the short-term, it shouldn’t affect either the bulk of Big 12 play or any kind of run come March. Last night, though, the omissions were apparent, as the Runnin’ Rebels held on a for a 63-59 win that was largely in doubt until a late blocked shot and a three-pointer by Oscar Bellfield sealed the win for the visitors.

-Speaking of Kansas State basketball, is there anyone in the world today who is scarier than this man? I would not be surprised if President Obama called on Coach Martin for future peace negotiations with world leaders. Just throw this guy into a room with North Korea’s Kim Jong-il and watch as the nukes are deactivated. As Kansas State forward Jamar Samuels put it, in terms of his coach’s now legendary gaze, “You have to treat it like the sun. Looking at it for more than a few seconds is dangerous to your health.”

-Huge game tonight in Saint Louis (despite no pro team or college one worth much) as the nationally ranked Missouri Tigers and the Illinois Fighting Illini face off in their annual Braggin’ Rights game. A bit of the shine was taken off this game with Illinois’ recent loss to UI-Chicago, but it may just make for a more competitive game in the end.

I’m just lucky that I’ll be sitting courtside for this one.

This post was a segment of Cub’s blog at milehighsportsview.blogspot.com. The Mile High Five is a daily portion of his blog that covers several aspects in the world of Denver and national sports and pop culture.