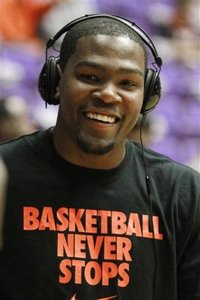 Negotiations between owners and players have gone from ugly to near disastrous over the last few days.

There’s an ultimatum on the table from the League, which players are not too thrilled with (shocking, I know), and there’s no telling where things will stand once the NBA-imposed Wednesday deadline comes and goes.

Kevin Durant maintains that players will stand strong despite the NBA’s bullying tactics, and when asked for his thoughts about the current lockout, he didn’t hold back.

The show was a respite from the NBA lockout, which hit its 129th day Sunday. But the work stoppage was an unavoidable shadow over the game, which after all, would not have happened had the league’s owners not locked out the players on July 1 … Players expressed varying degrees of emotion about the lockout. Lakers guard Steve Blake – the former Blazer who still lives in Portland – said when asked about his views on the lockout talks, “I have no comments on that.”

Then he repeated the same phrase twice more to other lockout questions before adding, “I love basketball, and I’m playing tonight, so I’m happy about that.”

The event’s biggest national star, [Kevin] Durant (who scored 31 of his game-high 47 points in the second half), had stronger comments. “Sickening, man, just sickening,” he said of the latest developments. “Us players, we’ve sacrificed, we gave up money. We did what we have to do, now it’s on the owners. It looks like they’re not going to give in.”

With the 2011-’12 season hanging in the balance, both sides are now scrambling to come up with a workable solution. If they are unable to this week, the NBA lockout won’t just be “sickening” anymore. We’ll have to come up with much stronger terms.