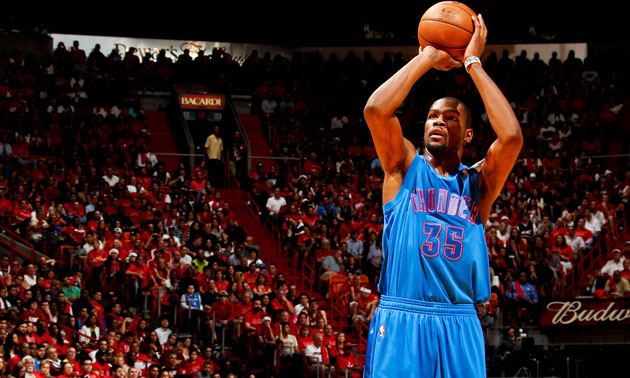 Kevin Durant is having one of the most efficient seasons in NBA history.

Through 31 games, he’s putting up 28.4 points, 7.9 rebounds and 4.1 assists per game while leading the Oklahoma City Thunder to a 24-7 record. Though most analysts have Durant ranked second or third in the MVP race this season, he’s striving for a feat Michael Jordan, LeBron James and Kobe Bryant have never reached.

Since the NBA introduced the three-point shot in the ’79-80 season, only five players have ever entered the 50-40-90 Club: Larry Bird (2x), Mark Price, Reggie Miller, Steve Nash (4x) and Dirk Nowitzki.

Bird and Nash are the only players to ever achieve the feat in multiple seasons, and Nash missed being named to the club five consecutive times by shooting 89.9 percent from the free-throw line in the ’06-07 season, 0.1 percent short of the mark.

Durant will enter Chesapeake Energy Arena tonight to face the Philadelphia 76ers shooting 52 percent from the field, 42 percent from downtown, and 90 percent from the charity stripe, all while scoring 28+ points per game. If he can continue his offensive domination, it would trump one of the best shooting campaigns in NBA history.

The only other player to reach the top of the mountain in terms of shooting perfection and offensive output is Larry Bird. As the first inductee into the 50-40-90 Club, Bird put up 53-40-91 while scoring 28.05 points per game. He followed that up with his second consecutive 50-40-90 season, turning in arguably the greatest season by a shooter ever. With a mesmerizing 29.93 points per game, Bird was unstoppable, shooting 53 percent from the field, 41 percent from three-point range, and 92 percent from the free-throw line.

If Durant can continue shooting lights out and bring up his scoring average a few points per game, he’ll do something that Jordan, Kobe, LeBron and even Bird never could. He’ll lead the League in scoring while turning in the best shooting campaign in NBA history. And that kind of milestone will become even more significant when it comes time to crown an MVP this season.