Kevin Durant: Whatever It Takes

With a vast thirst for knowledge and unrelenting work ethic, Kevin Durant has put together an MVP season…and he’s just getting started. 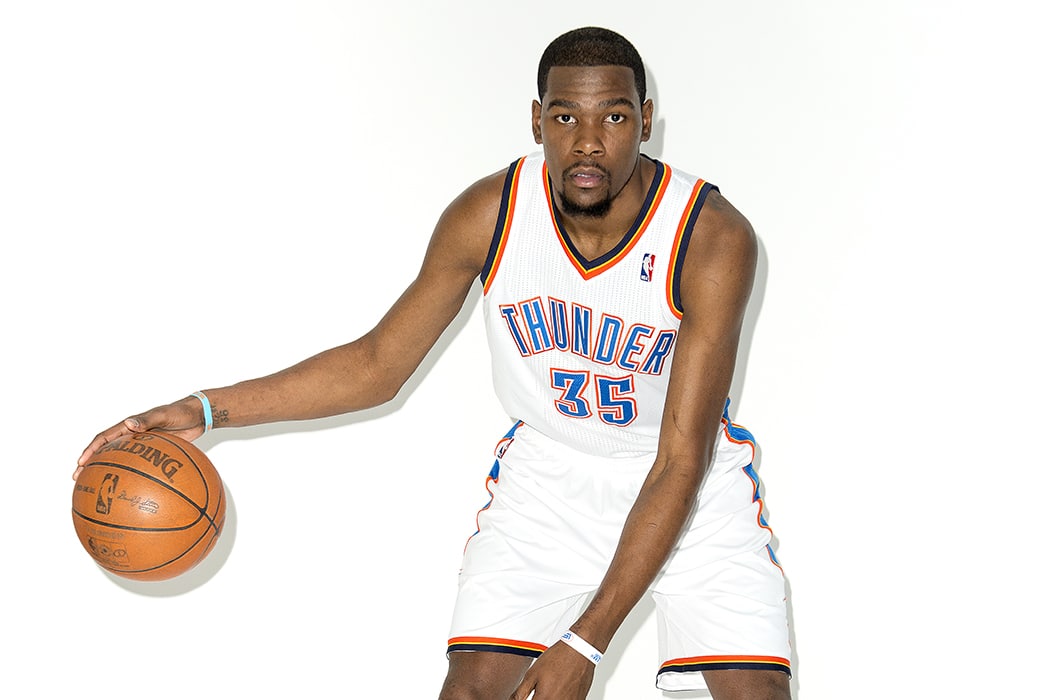 The look on Kevin Durant’s face when beast mode is turned up is calm, controlled, foreboding. He will score. Defender be damned.

We saw the look 43 hours ago, when Durant dropped a double-overtime game-winner in Toronto. But now, Kevin Durant is back in Oklahoma City, getting a cut before SLAM’s cover shoot. Apron draped from neck to camo sweats, the NBA’s leading scorer tilts down his head as his barber touches him up.

“I looked over and said, Grow up. I told them all to grow up. It was four guys, grown men.”

Durant glances up, a smile crosses his left cheek. The look.

“I told Mustafa Shakur on our team, I said, I’m going for the win. He shook his head. Then I came down, shot it and I looked over and started walking out. That was the best part of the night. Just to shut them up.”

The man isn’t that nice. The Thunder came back from an 8-point deficit with 48 seconds remaining, behind Durant’s 51 points, 12 rebounds, 7 assists, 7 treys and game-winning dagger. “The fans kind of awoke a monster that they didn’t want to,” Reggie Jackson laughs a couple days afterward.

Truth is, Durant’s been a monster practically every night. The ball has been in his hands more than ever this season, yet his offensive production (32.0 ppg) and efficiency (63.5 true shooting percentage) were at historic levels. He had more games of 30 points (47) than not (34) during the regular season, including 12 straight games in January.

As Issue 178 went to press, Durant had scored 25 points or more in 36 straight games, the longest streak since Michael Jordan did it in 40 straight games in 1986-87. (KD’s scoring streak eventually ended 41 games.—Ed.) And he managed to get compared to Jesus…at least once.

After Durant vacuum-sealed the air out of Air Canada Centre with that game-winning three, Raptors point guard Greivis Vasquez told reporters after the game that “Kevin Durant is like Jesus in this League.” No one objected.

Jordan may have been God in disguise, but KD has many of the GOAT’s qualities. Scoring aside, Durant’s combination of skill set, work ethic and competitiveness are formulaic of the League’s bronzed legends. Durant says it’s simple “self-evaluation” that fuels him to get better.

He’d be hard pressed to find a better scorer. KD’s offensive season has been so great that fans have been frantically trying to invent nicknames.

They can now call him MVP.

“If you ask any player in this League if they had an opportunity to get an individual award, if they care about it, they would say yeah,” Durant says. “It would definitely feel great to win my first MVP, but if I think about it every single day, then that takes my focus off the group.

“If you win, then all that stuff comes with it. And for us to win, I have to be the best teammate I can be and come to work every single day and play as hard as I can. Everything else is going to happen. I can live with whatever happens after that.”

That humility has both endeared Durant to fans and foiled his badass on-court persona. Durant will bark at an opponent’s bench while on court, and after the game, he’ll accompany a fan to an X-ray (true story). He’ll follow a big dunk with a “kill ’em and pray for ’em” gesture, and later be seen helping elderly people at the mall when the escalator isn’t working (another true story).

“He’s really not a good guy, you’re just being fooled,” coach Scott Brooks says. “He fooled me for a lot of years, I finally figured it out this year. With KD, he has a real quiet confidence about him, a quiet competitiveness about him. But he’s as competitive as I’ve ever been around anybody.”

Derek Fisher, who signed with Durant to win his sixth ring, has a unique perspective, having worked with KD and KB when both superstars were 25 years old.

“They’re different people with different games, different styles, different approaches,” Fisher says. “But I always talk about the similarity in their confidence, how they love to compete, love to win.”

Despite missing three starters for stretches of the season, the Thunder have won. They’ve actually played so well without Westbrook, critics have started to question whether the Thunder are better without him.

Durant has shot more, and more efficiently, and has distributed the ball at a career-high rate with Russ missing a large portion of the season. But make no mistake, this team is even more dangerous when their All-NBA point guard is fully healthy.

“That’s what great players do. They make players that they play with better, or at least make them feel that they’re better than they are, when they step on the floor. And to his credit, he’s done that,” says Nuggets coach Brian Shaw.

Jackson concurs: “If you get to the last six minutes of a tight game, you can almost put the game in your back pocket.”

Durant came into the League getting buckets in his sleep, but things were much different during those early years when Durant endured a combined 43 wins over his first two seasons.

“It feels like that was 10 years ago. But it was much needed,” Durant explains. “Every team has to go through that tough stretch in order for you to grow. The best part about this organization is the continuity we have with everything. We have the same coach. We have the same players, same core group of guys. Same trainers. Same everything.”

That continuity and trust allowed Durant to develop at a rapid pace—winning the scoring title at 21 and finishing runner up in MVP. The Thunder won 50 games that same season and were widely dubbed the L’s greatest up-and-coming team. Now they’re perennial title contenders.

“I don’t know if there are enough words to put into how much he means to the team, to the organization, to this city,” Fisher says. “This organization has only been in existence for only five, six years. He symbolizes what’s been able to be accomplished by the team in that period of time.”

Back at Chesapeake Energy Arena one day after our cover shoot, Kevin Durant handles the rock at the top of the key. Denver’s power forward’s feet are frantically trying to figure out a direction to move.

KD shakes him with a quick dribble to his right. Then left. Then forward, banking in the and-one. Easy Money.

“I felt good. I felt like I was back at the park, back at home,” Durant said after the game. “He bit on a few of them. And I was able to finish the play.”

Durant’s having fun with the game. But it wasn’t always this way.

“I was working out as a kid so much that I started to become a robot,” Durant says. “I just always worried about working out, and the fun started to soak out of the game. It was just like, if I ain’t having fun, then why am I playing?”

But that’s when the light turned on, and what Durant learned literally propelled him to the heights that he’s at today. KD fell in love with progress.

“That’s before I really knew how important working hard is and how much better you can get,” Durant says. “I could start to see the progress. That’s when it started to become more and more fun, just knowing that I can always get better if I just go ahead and put some time in.”

Since the mindset change as a high school freshman, Durant has been defined by hard work and keeping an open mind toward advice. You can’t argue with the results.

“Now that I know the significance of hard work,” explains Durant, “it’s just me playing the game on another level. Every time I have a bad game, or I mess up, or have a play I wish I could take back, I just learn from it.

“That’s been the most fun part: Finding out things that you can get better at, pointing them out and getting better from them.”

As good as Durant has become, it’s a never-ending progression. That’s why he’s still first and last in the gym. That’s why he picks the mind of every Thunder player and coach.

“Being open-minded to everybody is the thing I try to tell younger guys,” he says. “I always keep conscious of it myself. I can learn from anybody.”

And he thinks social media is changing the game in profound ways.

“I think there will be another Kevin Durant. I tell people all the time, YouTube and Twitter, that’s helping players because you get to see who you want to be like,” he says. “When I was a kid, I was like, I want to be like Tracy McGrady. But I never seen him unless he came on a national TV game.

“If I was watching a YouTube clip of what he did, I could go right on the court and try to do the same things. I couldn’t do that,” KD continues. “So now these players are seeing all their favorite players and who they want to be like, and they watching them. And they working on the same moves those guys are working on.”

With Durant churning out highlights like that double-crossover on the regular, it’s no surprise that players are already entering the League idolizing him.

“He knows that I used to look up to him. I used to try to play like him,” Nuggets forward Quincy Miller says. “Playing against KD [now] is just like the stuff you dream of. The player everybody compared you to, and still compare you to—you’re playing him now.”

Durant is more than happy to provide advice to players, whether it’s through Twitter (he regularly holds Q+As for his followers) or at his restaurant, KD’s Southern Cuisine, in OKC’s Bricktown district. “I’m there after just about every game, except if we lose. Then I go home,” KD laughs.

He’s found a second home in OKC and a lifelong family in the Thunder. He’s just enjoying the journey, even if his limitless ability comes with unfair comparisons.

“I’m nowhere near Jesus in this League. I’m just going out there having fun with the game, and some nights, Jesus is definitely out there watching over me. But I’d fail miserably if I try to stack up to that guy.