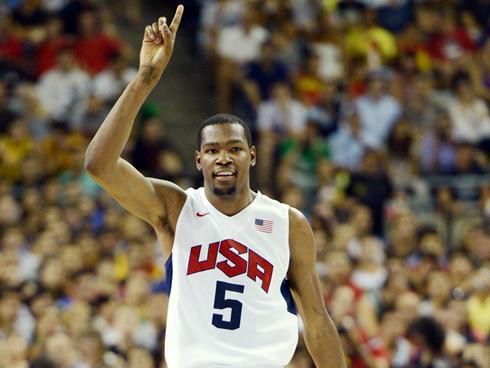 USA Basketball has lost its headliner heading into the FIBA Basketball World Cup—Kevin Durant has withdrawn from participating with the 2014 USA National Team.

“Kevin reached out to Coach K and myself this afternoon and expressed that he is just physically and mentally drained from the NBA season and his attention to his many responsibilities. He tried to give it a go at our recent Las Vegas training camp but felt coming out of camp that he was not prepared to fulfill the commitment he made to the team,” said USA Basketball National Team Managing Director Jerry Colangelo. “Coach K and I fully support Kevin. His well being is the most important thing to us and we support him taking the time to get ready for next season. He’s been part of the National Team program for eight years and a big part of the success we have achieved, and we look forward to him being part of our success in the future as well.”

“We are excited about the opportunity ahead of us and to getting back to work in Chicago on Aug. 14. All 15 players are committed to the USA Basketball standard, which is to come together to win gold medals.”

Durant explained his decision saying, “This was an extremely difficult decision as I take great pride in representing our country. I know that I owe it to my USA Basketball teammates to be totally invested in the experience. After going through training camp with USAB, I realized I could not fulfill my responsibilities to the team from both a time and energy standpoint. I need to take a step back and take some time away, both mentally and physically in order to prepare for the upcoming NBA season. I will be rooting for USAB and look forward to future opportunities with them.”

In addition to being drained, there’s a lot on the line for KD this summer. He’s on the verge of signing a very lucrative sneaker deal with either Under Armour or Nike, and his decision to withdraw from Team USA may in part be due to wanting to protect himself from injury with so much dough on the line.