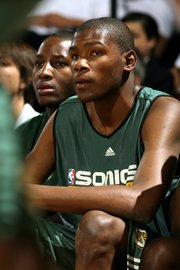 Why doesn’t KD have a shoe deal? According to Sports Business Radio, Durant is playing the waiting game and seeing who can give him the most coin between Nike and Adidas (Via: True Hoop):

According to my well informed sources, (Aaron) Goodwin and Durant have an agreement that Goodwin only gets paid on a shoe deal that is greater than $40M. Anything less than that and he doesn’t get a dime. If this is in fact true, its a shrewd move by the 18-year old Durant or whomever is advising him. The numbers being thrown around early in the Durant shoe negotiations were all north of $40M and some people even predicted that Durant could get as much as $60M for his shoe deal.”Well things started to drag on and the offers from Nike and adidas certainly weren’t becoming more lucrative.

According to my sources, adidas has a $40M deal on the table for Durant right now if he wants it. Nike’s deal is reportedly in the $30M range. Durant, who has known members of the Nike staff since he was in 8th grade, feels loyal to them and wants to take the $30M deal. Goodwin and Durant’s mom want him to take the $40M adidas deal. Goodwin obviously wants to get paid. Durant’s mom probably would like her son to have a few million dollars more in his pocket.

-Say hello to … coach Aaron McKie? Technically, he’s not a “coach”, but McKie is working with young Sixers players at the Vegas Summer League.

-Nikoloz Tskitishvili wants to go back to Denver, and Denver wants him back. Hey, I don’t get it, either.

-Following back surgery (yikes!) in March, Quentin Richardson is feeling a lot better these days and expects to be back in the Knicks’ starting lineup.

“I think I’ll be more explosive now, because I was so limited last year and the year before,” said Richardson.

-Vince is expected to steal from New Jersey sign for a boatload of money this week.